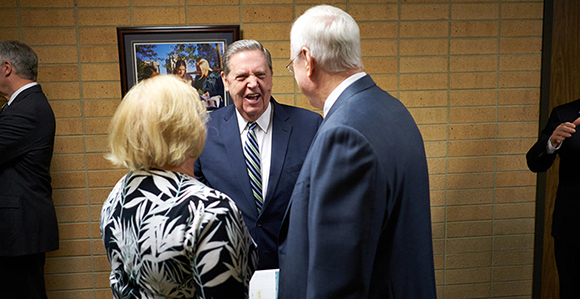 Editor's Note: In his remarks during the 2017 Seminar for New Mission Presidents, Elder Jeffrey R. Holland of the Quorum of the Twelve Apostles shared a missionary account, which was published by the Church News under the headline: “Elder Holland shares 'the missionary speech of all time' at Seminar for New Mission Presidents.” The article was widely read and shared. On July 31, Elder Holland released the following statement regarding the account:

"A few weeks ago when speaking to new mission presidents at the Missionary Training Center, I shared a story about two brothers, just as I heard it from individuals who knew the family and had heard it recounted by a family member. Within a few days, my office was contacted by the family, who expressed concern that some elements of that account were not accurate due to embellishing by a family member.

“There are inspiring and important missionary lessons in this story. The older brother did indeed leave his home and his family and for many years pursued the lifestyle I described in my talk. During these years his parents lovingly tried to maintain contact, prayed faithfully for him and even sent local leaders to seek after him. However, at the time his younger brother was called to serve as a missionary, the older brother had already returned to Idaho. With the help of missionaries there, he started the difficult and courageous process of changing his life. In time, he would return to full activity and be sealed in the temple, and he would also have a son who would serve a mission.

“As a courtesy to me the family contacted my office, wanting me to be aware of the inaccurate parts of the story and offering their help in avoiding any perpetuation of those elements in the account I heard. I am deeply touched by their humility and courage in doing so, and as an equal courtesy to them, I am withdrawing the story completely and request that it not be shared further."