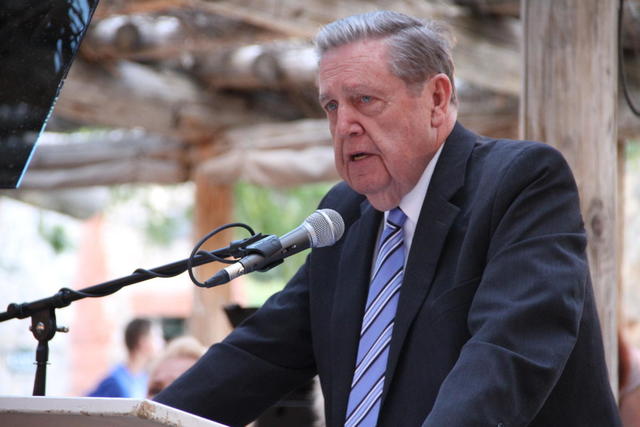 On Monday, Elder Holland shared stories of his Utah heritage, including how his non-Mormon ancestors found the Church.

Though he is a member of the Quorum of the Twelve Apostles, Elder Jeffrey R. Holland’s Mormon and Utah heritage is about diverse as it can get for one person, he said.

Elder Holland’s comment came in a July 17 address in the Bowery at This Is the Place Heritage Park in Salt Lake City to a joint gathering of the Sons of Utah Pioneers and Daughters of Utah Pioneers and family members. It was during the second annual SUPer DUPer Day, an occasion for the two groups to join together with their families for park activities and picnicking.

“First, a comment about my Holland family, who clearly were not Utah pioneers,” he said. “They were a rowdy bunch of Roman Catholic miners born in Ireland who made their way to Montana and Colorado, ending up in Park City at the turn of the 20th Century.”

Widowed at the age of 26, his grandmother with two little boys, Elder Holland’s father being the youngest, eventually made her way to Salt Lake City, where she was helped by a John Fetzer, the kindly bishop of the original Salt Lake City 8th Ward.