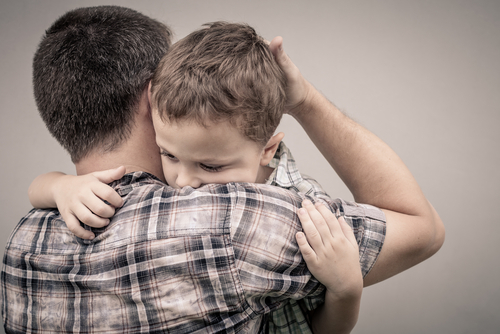 Many years ago I sat on the floor in front of a small bookcase in the dining room of our tiny two-bedroom apartment. I was immersed in reading and referencing and marking; deadlines were crowding in on me. Ironically, I was perusing President David O. McKay's book Gospel Ideals when Angela, my 2-and-1/2-year-old daughter, walked over to me and asked me to join her, her 1-year-old brother, David, and their mother in some games they were playing on the floor a few feet away. I responded to Angie that I was very busy and couldn't make it. Within three minutes David crawled over and asked: "Dad, you come play?" I called out to my wife at that point: "Shauna, can't you see that what I am doing is important? Could you please keep these children out of my hair until I finish this project?"

I dived back into my research. But then I felt my attention being drawn back to the threesome, almost as if I were being turned about physically. I looked into three pairs of eyes and what I saw was very unsettling——there was hurt and, in Shauna's eyes, at least, a bit of frustration. A voice came into my mind. Whether it was the voice of the Holy Ghost or the voice of conscience, I don't know: it was nevertheless an inner awareness of my duty. It stated simply but boldly: "Brother, behold the plan of salvation!" In that brief instant there came an avalanche of feelings——feelings of perspective, for in a flash I saw and felt things as they really were; feelings of overwhelming love for a trusting wife and adoring children; and yes, feelings of guilt for neglecting the most important people in my life. A rapidly repentant father crawled over to his family and became involved in things that really matter.

In the years since that experience, I have reflected again and again on what I felt that evening. Maybe it was a consuming love for my family, combined with a cold slap in the face, that awakened me momentarily. Other things over the years have served a similar function. Shauna has gotten my attention occasionally when I have chosen to bury myself in a book and ignore the family. She has said simply: "Bob, if you're not careful, you may grow up to be a very intelligent ministering angel." That works, too. I haven't always been the greatest husband and father since that red-letter day in my life, but I have been better. And it is amazing how we can be tutored by the medium of memory.

One really ironic thing I have noticed is our frequent unwillingness to be as patient and forgiving with family members as we are with friends, associates, or even strangers. Most of us wouldn't consider publicly insulting a colleague or belittling an acquaintance or slipping into the silent treatment with co-workers at church. But we often do such things to those who matter most to us. Because we desperately want our little ones to be ever so much better than we were, we tend to become impatient with their lack of progress, irritated at their mistakes in judgment, and downright angry about their failings. I have far too often caught myself shaking my head and wondering when the spirit of life and good judgment would descend upon my teenagers, especially when their choices were not as wise as I would have preferred. If the Lord had wanted to put a 40-year-old head on the shoulders of a 16-year-old, I suppose he would have done so; instead, he almost always attaches the head (and heart and emotions and hormones) of a 16-year-old to a 16-year-old.

Jeffrey R. Holland once described a similar painful situation in his own family: "Early in our married life my young family and I were laboring through graduate school at a university in New England. Pat was the Relief Society president in our ward, and I was serving in our stake presidency. I was going to school full-time and teaching half-time. We had two small children then, with little money and lots of pressures.

"One evening I came home from long hours at school, feeling the proverbial weight of the world on my shoulders. Everything seemed to be especially demanding and discouraging and dark. I wondered if the dawn would ever come. Then, as I walked into our small student apartment, there was an unusual silence in the room.

"'Matthew has something he wants to tell you,' Pat said.

"'Matt, what do you have to tell me?' He was quietly playing with his toys in the corner of the room, trying very hard not to hear me. 'Matt,' I said a little louder, 'do you have something to tell me?'

"He stopped playing, but for a moment he didn't look up. Then two enormous, tear-filled brown eyes turned toward me, and with the pain only a 5-year-old can know, he said, 'I didn't mind Mommy tonight, and I spoke back to her.' With that he burst into tears, and his entire little body shook with grief. A childish indiscretion had been noted, a painful confession had been offered, the growth of a 5-year-old was continuing, and loving reconciliation could have been wonderfully underway.

"Everything might have been just terrific——except for me. If you can imagine such an idiotic thing, I lost my temper. It wasn't that I lost it with Matt——it was with a hundred and one other things on my mind. But he didn't know that, and I wasn't disciplined enough to admit it. He got the whole load of bricks.

"I told him how disappointed I was and how much more I thought I could have expected from him. I sounded like the parental pygmy I was. Then I did what I had never done before in his life: I told him that he was to go straight to bed and that I would not be in to say his prayers with him or to tell him a bedtime story. Muffling his sobs, he obediently went to his bedside, where he knelt——alone——to say his prayers. Then he stained his little pillow with tears his father should have been wiping away.

"If you think the silence upon my arrival was heavy, you should have felt it now. Pat did not say a word. She didn't have to. I felt terrible!

"Later, as we knelt by our own bed, my feeble prayer for blessings upon my family fell back on my ears with a horrible, hollow ring. I wanted to get up off my knees right then and go to Matt and ask his forgiveness, but he was long since peacefully asleep.

"My own relief was not so soon coming, but finally I fell asleep and began to dream, which I seldom do. I dreamed Matt and I were packing two cars for a move. For some reason his mother and baby sister were not present. As we finished I turned to him and said, 'Okay, Matt, you drive one car and I'll drive the other.'

"This 5-year-old very obediently crawled up on the seat and tried to grasp the massive steering wheel. I walked over to the other car and started the motor. As I began to pull away, I looked to see how my son was doing. He was trying——oh, how he was trying. He tried to reach the pedals, but he couldn't. He was also turning knobs and pushing buttons, trying to start the motor. He could scarcely be seen over the dashboard, but there staring out at me again were those same immense, tear-filled, beautiful brown eyes. As I pulled away, he cried out, 'Daddy, don't leave me. I don't know how to do it. I'm too little.' And I drove away.

"A short time later, driving down that desert road in my dream, I suddenly realized in one stark, horrifying moment what I had done. I slammed my car to a stop, threw open the door, and started to run as fast as I could. I left car, keys, belongings, and all——and I ran. The pavement was so hot it burned my feet, and tears blinded my straining effort to see this child somewhere on the horizon. I kept running, praying, pleading to be forgiven and to find my boy safe and secure.

"As I rounded a curve, nearly ready to drop from physical and emotional exhaustion, I saw the unfamiliar car I had left Matt to drive. It was pulled carefully off to the side of the road, and he was laughing and playing nearby. An older man was with him, playing and responding to his games. Matt saw me and cried out something like, 'Hi, Dad. We're having fun.' Obviously he had already forgiven and forgotten my terrible transgression against him.

"But I dreaded the older man's gaze, which followed my every move. I tried to say 'Thank you,' but his eyes were filled with sorrow and disappointment. I muttered an awkward apology and the stranger said simply, 'You should not have left him alone to do this difficult thing. It would not have been asked of you.'

"With that, the dream ended, and I shot upright in bed. My pillow was stained, whether with perspiration or tears I do not know. I threw off the covers and ran to the little metal camp cot that was my son's bed. There on my knees and through my tears I cradled him in my arms and spoke to him while he slept. I told him that every dad makes mistakes but that they don't mean to. I told him it wasn't his fault I had had a bad day. I told him that when boys are five or fifteen, dads sometimes forget and think they are fifty. I told him that I wanted him to be a small boy for a long, long time, because all too soon he would grow up and be a man and wouldn't be playing on the floor with his toys when I came home. I told him that I loved him and his mother and his sister more than anything in the world, and that whatever challenges we had in life, we would face them together. I told him that never again would I withhold my affection or my forgiveness from him, and never, I prayed, would he withhold them from me. I told him I was honored to be his father and that I would try with all my heart to be worthy of such a great responsibility" (On Earth As It Is in Heaven, 165-68).

People matter more than things. People matter more than schedules and timetables and products. God and Christ work full time in the business of people, and perhaps that primary labor contributes measurably to their fulness of joy. Sometimes when the most important things get crowded out by the least important, the Lord finds a way to jerk us back to reality and focus us on fundamentals.

Read more insights, advice, and words of comfort about the difficulties of parenting in Robert L. Millet's book When a Child Wanders, available at Deseret Book stores and on deseretbook.com.