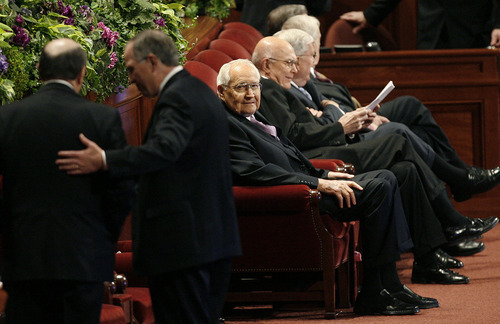 Photo from the Salt Lake Tribune.

Earlier this week, Elder L. Tom Perry was hospitalized for breathing troubles. Though the Church announced that Elder Perry was released from the hospital and was resting at home Wednesday night, today, the Church gave an important update on Elder Perry's health:

“Elder L. Tom Perry will begin radiation treatment this morning after being diagnosed with cancer in the thyroid gland." They noted that, "Elder Perry is the second most senior apostle in terms of length of service in the Quorum of the Twelve, and the oldest living apostle."

"Elder Richard G. Scott, age 86, was hospitalized last evening due to gastrointestinal bleeding," shared Eric Hawkins, Senior Manager of Media Relations for the Church Public Affairs Department. "The bleeding was brought under control and he is resting comfortably."

Additionally, the Church noted, the two brethren "are grateful for the prayers and kindnesses expressed on their behalf.”

-->Releated Reading: Why anyone who says the apostles are too old is wrong