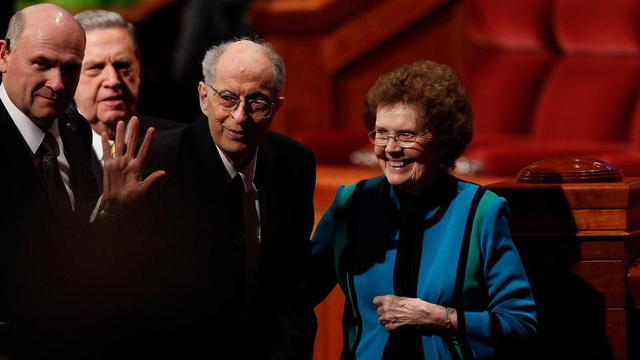 As the concluding speaker in the last session of general conference, Elder Neil L. Andersen of the Quorum of the Twelve Apostles took a moment to share a few sentences from the talk Elder Robert D. Hales had prepared before passing away on Sunday afternoon.

"The First Presidency had told Elder Hales that he could give a brief message in the Sunday morning session if his health permitted it," Elder Andersen said. "While his health did not permit it, he prepared a message, which he finished last week and shared with me. Given his passing approximately three hours ago, I share just three lines from this talk. Quoting Elder Hales:

'When we choose to have faith, we are prepared to stand in the presence of God. After the Savior’s crucifixion, He appeared only to those who had been faithful in the testimony of Him while they lived in mortality. Those who rejected the testimonies of the prophets could not behold the Savior’s presence nor look upon His face. Our faith prepares us to be in the presence of God.'"

Elder Andersen added, "How kind of the Lord to impress upon President Russell M. Nelson to quickly leave the first session of conference, skip his lunch, and quickly move to the bedside of Elder Hales, where he could arrive and be there, his quorum president, with the angelic Mary Hales, as Elder Hales graduated from mortality.”