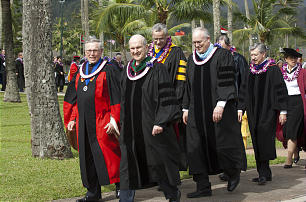 Prophetic visions of the past, present and future are a gift from Heavenly Father to guide His faithful children, Elder Russell M. Nelson of the Quorum of the Twelve said during commencement services at Brigham Young University-Hawaii on April 9.

"You are beneficiaries of prophetic visions of the past," Elder Nelson said. "The Restoration of the gospel was initiated and authenticated by visions and visitations from heavenly messengers."

Elder Nelson spoke of the vision President David O. McKay had about international school children participating in a flag ceremony, 34 years previous to the foundation of the Church College of Hawaii in 1955 — what is now BYU-Hawaii. "Today I stand on this ground made sacred by the prophets and apostles who have labored here through these many intervening years," he said. "I see bright and able young men and women from more than 70 countries, representing a host of diverse languages and cultures."