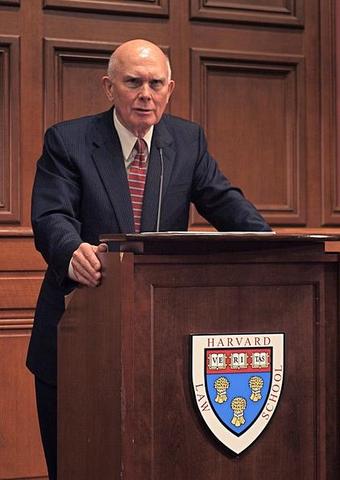 Elder Oaks explained more about why the Constitution should not be used as a weapon, saying we have the right and the responsibility to “engage in vigorous public debate” about seemingly reckless proposals. “But we should not use up a constitution by attempting to strike down every ill-conceived act of government or to discredit every unwise official,” he continued.

Once Elder Oaks had given these warnings, he went on to explain the four major fundamentals of our Constitution—popular sovereignty, division of state and federal powers, a bill of rights and separation of powers (or checks and balances).

The first and most important fundamental is popular sovereignty. This explains the idea that the people are the sovereigns and have given the government certain powers. But “sovereignty in the people necessarily implies responsibility in the people,” said Elder Oaks. “Instead of blaming their troubles on a king, on a cabal of military leaders, or on some distant group of wise men, citizens who are sovereign must share a measure of the burdens and responsibilities of governing.”

However, he said, a constitution cannot be completely rigid and be expected to last. The founders determined that the Constitution had to be amendable, but it should not be in the power of the majority to change it anytime they wished, or the government would not be able to protect individuals or minorities. “The government of the United States had to be ultimately responsible to the will of the sovereign people, but it also had to be stable,” Elder Oaks said. “The Constitution had to give government the power to withstand the cries of a majority of the sovereign people in the short run, but it had to be subject to their direction in the long run.” This was achieved “through a power of amendment that was ultimately available but deliberately slow.” As a result, two-thirds of the Senate and three-fourths of the House must approve any amendment.

The second fundamental is the division of powers in a federal system, or the separation of state powers and national powers. Elder Oaks described this has limiting national power in favor of state or more local governments who are closer to the people and the issues they face and are thus more responsive.

However, Elder Oaks said he has “seen much neglect of this fundamental constitutional principle. . . . Whatever the merits of current controversies over the laws of marriage and child adoption and the like, let us not forget that if the decisions of federal courts can override the actions of state lawmakers on this subject, we have suffered a significant constitutional reallocation of lawmaking power from the lawmaking branch to the judicial branch and from the states to the federal government.”

The third fundamental is a bill of rights. Elder Oaks focused on the first guarantee in the U.S. Bill of Rights, which says, “Congress shall make no law respecting an establishment of religion, or prohibiting the free exercise thereof.” Freedom of religion is “one of the supremely important founding principles in the United States” and one of the main reasons people came to America. “I maintain that in our nation’s founding and in our constitutional order, religious freedom, and the freedoms of speech and press associated with it in the First Amendment, are the motivating and dominating civil liberties and civil rights.”

However, the government has a responsibility to protect all people and their rights, thus the government must interfere with any religion that violates another’s rights. Unfortunately, there are some who claim that religious speech influences people to act, more so than any other type of speech and that religious speech should be considered less protected than other speech because it can influence people much easier and much more powerfully.

“But,” according to Elder Oaks, “unless the guarantee of free exercise of religion gives a religious actor greater protection against government prohibitions than are already guaranteed to all actors by other provisions of the Constitution (like freedom of speech), what is the special value of religious freedom? Surely the First Amendment guarantee of free exercise of religion was intended to grant more freedom to religious preaching and action than to other kinds of speech and action.”

Finally, Elder Oaks suggested that as the responsible sovereign members of our nation, we should understand the Constitution, support the law, practice civic virtue (including following the laws, being willing to serve on juries, and taking advantage of our right to vote), maintain civility in political discourse and promote patriotism.

Elder Oaks closed by reciting the fourth verse of “My Country, ‘Tis of Thee,” saying, “It expresses gratitude to God for liberty, and it voices a prayer for continued blessings.”

Elder Oaks, who is widely acknowledged as an expert on the U.S. Constitution, participated in the event as the keynote speaker at the invitation of the University of Utah’s Hinckley Institute of Politics and America’s Freedom Alliance, who sponsored the two-day lecture series.