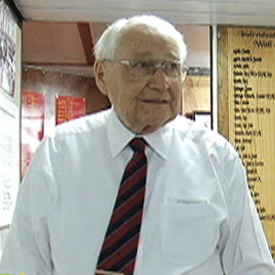 One of the highest leaders of the Church of Jesus Christ of Latter-Day Saints is on island this weekend. L. Tom Perry is considered by church members, who are often referred to as Mormons, to be one of 12 living apostles.

With more than 2,000 members on Guam and Saipan and about 14 million worldwide, Perry is on island to restructure church leadership. Perry said, "Now the responsibility falls on the local leaders to administer the church, and not having someone sent in from outside to do it."

While on Guam Perry was able to take a walk down memory lane at the Pacific War Museum. Perry served in the Marine Corps' 2nd Division, the same division planning to make Guam home during the military buildup.
Read the rest of this story at guamnewswatch.com