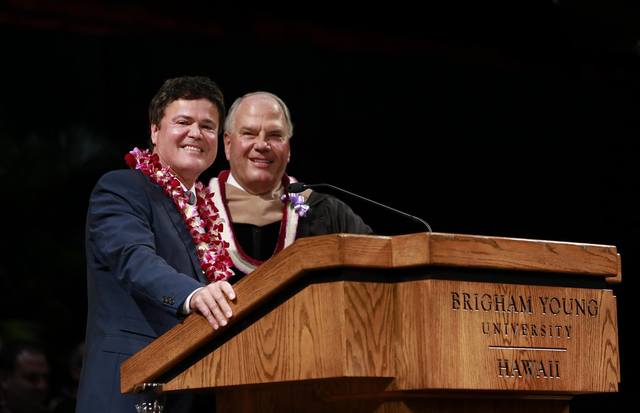 Most people would agree giving a prepared, planned speech in front of hundreds of people is a nerve-wracking experience, but being asked to give an impromptu speech by a general authority? That's beyond intimidating.

But when Elder Rasband asked Donny Osmond to give an unplanned speech to 215 graduates on Dec. 15, Donny nailed it.

Donny, who was attending the ceremony to support his graduating daughter-in-law, Alta Roberts Osmond, sang a little with his audience but joked that they probably only knew his voice as Captain Li Shang from the Disney movie Mulan, according to the Deseret News.

But all jokes aside, Donny ended up sharing a beautiful message about preparation, opposition and even shared a little of his testimony.

“You have prepared yourself, you have God on your side, your Savior Jesus Christ believes in you,” Osmond told graduates, according to the Deseret News. “The gospel is true, without it I don’t know where I would be.”