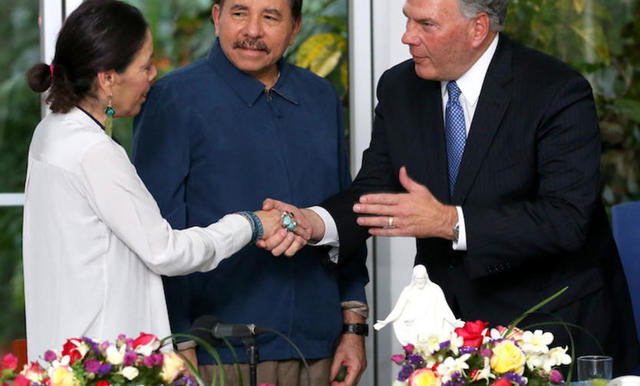 Elder Ronald A. Rasband—accompanied by Elder Craig C. Christensen of the Presidency of the Seventy and Bishop Dean M. Davies, first counselor in the Presiding Bishopric—recently returned from a 12-day trip to Central America. There he had the chance to meet with members as well as share LDS beliefs with the Nicaraguan President Daniel Ortega, who called the apostle and general authorities "ministers of peace."

“It was a remarkable meeting,” reported Elder Rasband. “We spoke with President Ortega about families, education, humanitarian aid, welfare, and about the efforts the Church has made in his country.”

Sitting knee-to-knee with Elder Rasband, President Ortega asked several questions about the Church and its history.

“It was like teaching the first missionary lesson as I talked to him about the restoration of the gospel. I told him that we belong to the restored Church of Jesus Christ,” said Elder Rasband.

Lead image from Deseret News of Elder Ronald A. Rasband presenting a statuette of "The Christus" to Nicaragua President Daniel Ortega and his wife, First Lady and Nicaragua Vice President Rosario Murillo.