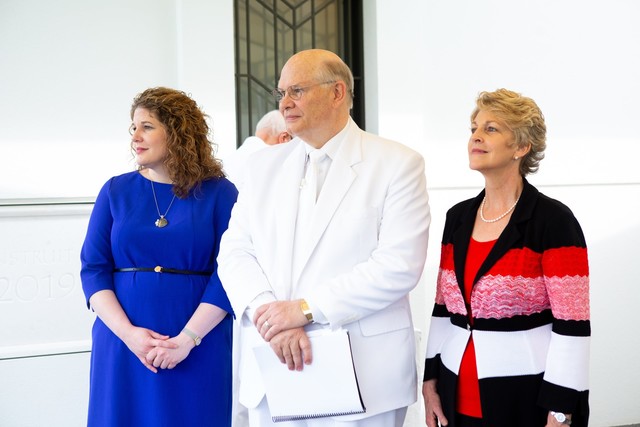 When helping to identify images for a last-minute piece of artwork for the new Kinshasa Democratic Republic of the Congo Temple, Elder Dale G. Renlund and his wife, Sister Ruth L. Renlund, recommended something representing the Congo River — second only to the Nile as the longest river on the continent, second only to the Amazon as the world’s largest in discharge volume, and tops as the world’s deepest and the only river to cross the equator twice.

Elder Renlund, who dedicated the temple in Kinshasa in three sessions Sunday, April 14, called the large piece depicting the renown Zongo Falls (also known as Nzongo) — some 130 kilometers or 90 miles from the capital city and feeding into the Congo River — as having “phenomenal symbolic significance.” Painted by Provo artist David Meikle and simply titled Congo Falls, it has been placed prominently just inside the temple’s entrance.

“When early Christian missionaries came, their converts to Christianity would take their fetishes — these inanimate objects that they believed were magical, that had spirits and that they would worship — and do a pilgrimage to these falls and throw those festishes into the falls as a token of their commitment,” said Elder Renlund to the Church News before leaving for Kinshasa for the weekend dedication events.

Those going to the Kinshasa temple will pass by the painting — having made their own modern-day commitments — as they enter to do ordinance work for themselves or their ancestors.