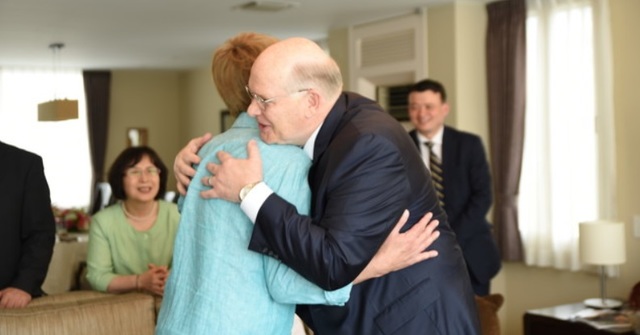 byElder and Sister Renlund, excerpted from "The Melchizedek Priesthood" | Jun. 14, 2018

The following is an excerpt from The Melchizedek Priesthood. While Elder and Sister Renlund are addressing priesthood holders in this passage, the council is true and imperative for every member of the Church.

“And again I say unto you, my friends, for from henceforth I shall call you friends, it is expedient that I give unto you this commandment, that ye become even as my friends in days when I was with them, traveling to preach the gospel in my power” (Doctrine and Covenants 84:77; emphasis added).

The commandment, stated imperatively, is: “Be My friend.” The Savior told His Apostles of old: “Ye are my friends, if ye do whatsoever I command you. Henceforth I call you not servants; for the servant knoweth not what his lord doeth: but I have called you friends; for all things that I have heard of my Father I have made known unto you” (John 15:14–15).

The way to become His friend today is no different than in days of old. It starts with a commitment to keep His commandments. The Savior cannot share all that Heavenly Father has communicated to Him unless the priesthood holder is willing to completely align his will with God’s. Once a priesthood holder is so aligned and willing to consecrate his life to the Savior, his standing with the Savior changes. He is not simply a disciple; he is certainly not a hireling or an evangelical mercenary. He is the Savior’s friend, and the Savior will be his friend—but not an ordinary friend. He is a friend who carries burdens, cares for needs, and sustains a priesthood holder on His errand.

The Savior says to the priesthood holder that he will receive help in teaching the gospel: “Neither take ye thought beforehand what ye shall say; but treasure up in your minds continually the words of life, and it shall be given you in the very hour that portion that shall be meted unto every man” (Doctrine and Covenants 84:85).

Through Joseph Smith, the Lord revealed: “And whoso receiveth you, there I will be also, for I will go before your face. I will be on your right hand and on your left, and my Spirit shall be in your hearts, and mine angels round about you, to bear you up” (Doctrine and Covenants 84:88).

Our Friend is in the vineyard laboring today, supporting the priesthood holder in his responsibility. He has prepared the way over decades for those priesthood holders who trust the Lord as a friend. Friends trust each other. They work together to build God’s kingdom. . . .

The Lord taught by both His words and His actions. His instruction was clear. The Apostles were to follow His example by serving others. The Lord promised them happiness if they followed His example. . . .

Often the opportunity to serve is not convenient. Heavenly Father’s children do not schedule their emergencies. Just as the Savior postponed important business to minister to the multitude in the Americas, priesthood holders must often postpone other activities in order to serve. While serving as a bishop, I was also a busy physician. One night I had had no sleep because I had been in the hospital caring for sick patients. As I was returning home, I received a phone call from a distressed ward member. Her husband had been incarcerated and was scheduled for deportation from the United States the following morning. I remember being so tired, wishing I could get some rest before having to think of anything else.

Instead of going home, I drove to the jail. I prayed that the Lord would help me and the family. As I arrived at the jail, a thought came that I should contact an individual with whom I was acquainted. I did so, and she provided some additional contacts that led to the release of the ward member. A later judicial hearing eventually led to resolution of the immigration issue for this young family. I was grateful that I put my own convenience aside and served when the need arose.

Often, when I am assigned to attend conferences, mission tours, leadership meetings, or other functions, I feel that somewhere in the congregation is an individual whom I need to find and serve. Once, we arrived late one night in Saskatoon, Canada. The next day, we were participating in several meetings. We were very much looking forward to having a couple of hours in the morning to prepare further for the meetings. A stake president picked us up at the airport and drove us to a hotel. As he was dropping us off at midnight, he said, “I know I shouldn’t ask you, but we have a member of our stake who is desperately ill, and I feel he and his family would be helped if you gave him a blessing.”

Sister Renlund and I looked at each other and knew that there was only one way to respond. Earlier than we had planned, we arose the next morning and went with the stake president to minister to a family in need and a beloved son of Heavenly Father. It turned out to be the most meaningful part of our visit to Saskatoon.

The concept of priesthood in The Church of Jesus Christ of Latter-day Saints is unique. A portion of God's power is delegated to "individuals who He knows perfectly well are imperfect." How does that work? As authors Dale and Ruth Renlund ask, "How is it conceivable that His awesome, delicate power could be used by both an illiterate farmer and a rocket scientist—to equal effect—in the salvation of humankind?"

This helpful book "has arisen in large part from questions we have asked each other over the years," write Elder and Sister Renlund. "The quest for an understanding of the priesthood and its proper application has continued through our respective medical and legal training and our careers outside of the home. A fuller understanding and application of the priesthood power has required both of us to work together inside our home."

Understanding the doctrine of the priesthood and the principles that govern its use is a pursuit worth of any member of the Church, but one that should be of special concern to those who hold or are preparing to hold the Melchizedek Priesthood. This careful explanation offers a perfect way to enhance your knowledge and appreciation of priesthood power and how to use it.