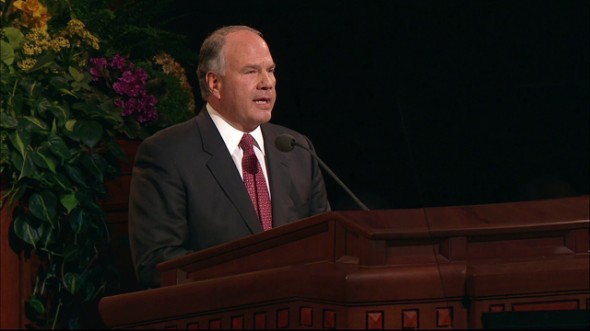 5 Things You Should Know About Elder Ronald A. Rasband

In Fall 2015 General Conference, Elder Ronald A. Rasband was sustained as the 98th apostle, along with two other apostles, Gary E. Stevenson and Dale G. Renlund, an event that hasn't occurred in the Church since 1906 when Elders George F. Richards, Orson F. Whitney, and David O. McKay were called as apostles of the Lord.

Check out some fun facts about the 98th apostle, from where he served his mission to what his job was before he was called.

Be sure to also learn more about the 99th and 100th apostles called, Elders Gary E. Stevenson and Dale G. Renlund.

1. Elder Rasband is the descendent of faithful pioneers.

"Like Nephi of old, I was born of goodly parents in the gospel and they of goodly parents back six generations. My earliest ancestors who joined the Church were from England and Denmark. These early pioneers gave their all to the gospel of Jesus Christ and leave a legacy for their posterity to follow. I am so grateful for a multigenerational Latter-day Saint family, and I know this is a worthy goal for all of us to strive for."

Elder Rasband served as a missionary in the Eastern States Mission from 1970-1972. The mission was headquartered in New York City and encompassed the whole New York Metro area, while also stretching into western New York and Pennsylvania.

In 1996, Elder Rasband returned to New York when he was called to serve as president of New York New York North Mission until 1999. One of his initiatives was to have missionaries serve as volunteers at Ellis Island and the Statue of Liberty, in order to make the missionaries more visible.

3. Elder Rasband used to be the president and chief operating officer of Huntsman Chemical Corporation.

Elder Rasband attended the University of Utah. He also served as an elders quorum president in the Salt Lake University First Stake, where he met Jon Huntsman, who was on the high council. In 1976, he joined Huntsman Container Company as a sales representative, and in 1987, he was appointed President and Chief Operating Officer of Huntsman Chemical Corporation. He left Huntsman Chemical Corporation in 1996 to serve as a mission president in New York.

4. Elder Rasband was called as a general authority and member of the First Quorum of the Seventy in April 2000.

As a general authority, Rasband has served in several area presidencies, including as a counselor in the presidency of the Europe Central Area. In fact, while serving in this position, Elder Rasband dedicated the first LDS chapel built in the Czech Republic. He was later president of the Utah Salt Lake City Area and executive director of the Church's Temple Department.

In 2005, he was called as a member of the Presidency of the Seventy. He was responsible for the North America Northwest and North America West areas. In August 2007, he was assigned to the Utah North, Utah South, and Utah Salt Lake City areas. In April 2009, Elder Rasband became the senior and presiding member of the Presidency of the Seventy when Neil L. Andersen was called to the Quorum of the Twelve Apostles.

5. Elder Rasband married his wife, Melanie Twitchell, in the Salt Lake Temple. They have been married for 42 years.

Elder Ronald A. Rasband married Melanie Twitchell in the Salt Lake Temple on September 4, 1973. They are the parents of five children and have 24 grandchildren.