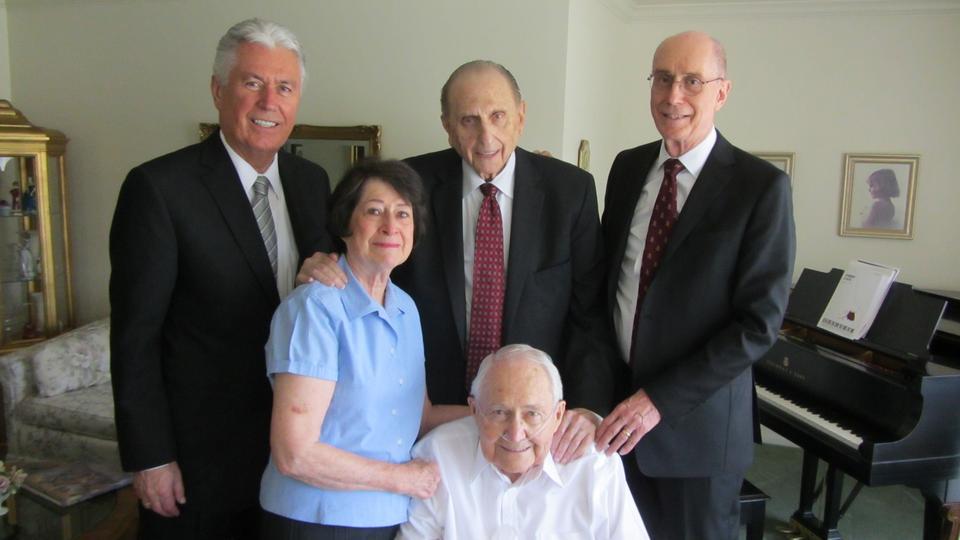 The First Presidency on a recent visit to the home of Elder and Sister Perry (May 1, 2015).
Via Mormon Newsroom.

After being hospitalized for gastrointestinal bleeding April 24, Elder Richard G. Scott was released from the hospital on April 28. Friday, the Church updated his health status with this statement:

"Elder Richard G. Scott, 86, is resting at home recovering from his recent hospitalization for internal bleeding. An ulcer in the stomach was found and the bleeding was controlled without major surgery. Elder Scott, known for his gentle manner and devoted service, has experienced a fading memory incident to age, and is not fully able to participate in meetings of the Quorum of the Twelve at this time. Doctors consider his condition as stable."

The statement also updated Church membership on Elder Perry's health, saying that he has resumed his responsibilities this week while still under medical care for his thyroid cancer.

Previously, Church spokesman Eric Hawkins noted that the Brethren are always "grateful for the prayers and kindnesses expressed on their behalf.”