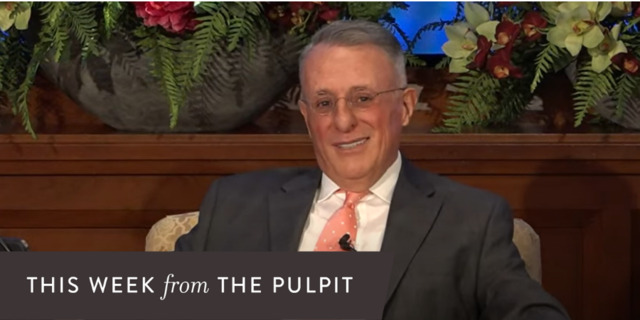 Editor’s note: “This week from the pulpit” highlights recent messages by General Authorities and General Officers of the Church.

Several Church leaders posed thought-provoking questions in their messages this week. In preparation for a devotional to Portuguese-speaking young adults, Elder Ulisses Soares posted on Facebook asking for responses to the question, “How did the challenges you faced in 2020 help you get closer to the Savior?” Later in the week, Elder Kyle S. McKay asked BYU students to consider, “What if there be no Christ?” And Elder Kazuhiko Yamashita spoke at BYU–Hawaii and asked returned missionaries, “What [gifts] did you bring back to home?"

Take a moment to seek inspiration about the important questions of your life by reading through messages from Church leaders this week.

Elder Soares exhorts vast audience of Portuguese-speaking young adults to exercise faith, draw near to the Savior and follow the prophets

In his own native language, Elder Ulisses Soares testified Sunday to Portuguese-speaking young adults spread across the world that drawing near to the Savior and trusting in His ordained servants remedies pandemics, economic hardships, and all other tribulations.

“Following the counsel of the prophets will protect us and will cause the heavens to shake for our good,” said Elder Soares of the Quorum of the Twelve Apostles in a young adult devotional originating from Church headquarters and broadcast to Brazil, Portugal, and several African nations.

Sunday’s devotional marked a memorable moment for the Brazilian-born Apostle. It was the first time Elder Soares spoke in an Apostle-led devotional for a global audience in his native language of Portuguese.

He was joined by his wife, Sister Rosana Soares—along with several other couples for a question-and-answer session addressing several questions submitted by Portuguese-speaking young adults from across the world.

Read a full summary of remarks from Elder and Sister Soares at Church News.

In BYU devotional, Elder McKay answers the question, ‘What if there be no Christ?’

In the beloved and well-known Christmas classic It’s a Wonderful Life, George Bailey is shown what the world would be like without him. In a BYU devotional broadcast on Tuesday, March 24, Elder Kyle S. McKay explored the “frightening hypothetical”—“What if there be no Christ?”

To start with, the General Authority Seventy told BYU students gathered both in the Marriott Center and virtually, that “if there be no Christ, then there is no resurrection. And if there is no resurrection, death is the end. Or in other words, death has no end. Those who reject the doctrine of Christ embrace the idea of extinction, the doom of never-ending death.”

The secularist, anti-Christ pitch focuses on “eat, drink and be merry because this is it,” Elder McKay said.

But the good news of the gospel is that individuals have potential that is “higher, deeper and fuller than simply living the life of a beer commercial. Our life is forever, and the resurrection is real because there is a Christ,” Elder McKay declared.

Read more of Elder McKay’s remarks, including the “joyous reality” of Jesus Christ, at Church News.

In BYU–Idaho devotional, Elder Schmutz teaches how to receives all of God’s promised blessings

“There is no truth more widely known or accepted than this: God loves His children,” taught Elder Evan A. Schmutz, General Authority Seventy and member of the Utah Area Presidency in a BYU–Idaho devotional Tuesday, March 23. 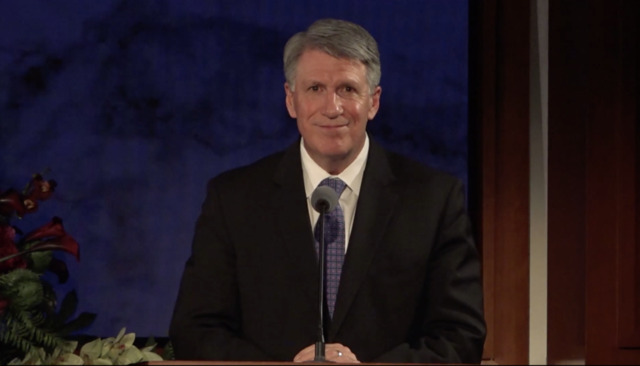 Because of this love, God makes the gift of eternal life available to His children through Jesus Christ. “But it must be remembered that receiving the fruits of God’s love in our lives, and the richness of the promised rewards, are conditioned on how we respond to His perfect love,” Elder Schmutz said.

He recounted a commercial he had seen some years ago, in which a young woman visited her aging father.

“The daughter greeted him with a kiss and then turned to assist by washing some dishes in the sink. Thus, her back was turned to her father. She began to speak, asking a question: ‘Dad, how do you like the new iPad I bought you for your birthday?’ She heard no response, so she asked again, in a little louder voice: ‘Dad, do you like the new iPad I gave you?’ Again, no response.”

The daughter turned around to see her father chopping vegetables using the new iPad as a cutting board, then scraping the chopped vegetables from the iPad into boiling water.

Her father did not know or understand the value of the iPad or what it could do when used for its intended purposes and could not enjoy the full use of the gift. The ability to take full advantage of the gifts and promises God has offered to His children follow similar principles.

Read more about those principles and find remarks from Sister Cindy L. Schmutz and Church News.

Each person who comes to earth fought for the kingdom of God before they were born and continues to do so on earth through sharing, teaching, and living the gospel of Jesus Christ. Understanding these principles can help one understand who they are.

Elder Kazuhiko Yamashita, General Authority Seventy, and his wife, Sister Tazuko Yamashita, discussed answers to three questions for students during a March 23 BYU–Hawaii devotional broadcast, to help them understand who they are and their divine identity.

‘Do you remember what you were doing before you were born?’

“You are God’s children,” Elder Yamashita said. “You were living with your Heavenly Parents.” Although each person was happy at that time, Heavenly Father knew that His children could not progress or develop the godlike qualities He possesses without leaving Him for a time.

To do this, each person would need to leave their premortal home, gain a physical body, leave their physical bodies behind at death, and be reunited with them in the resurrection. “If you passed your tests, you would receive the fulness of joy that your Heavenly Father has received,” Elder Yamashita said.

Read the full article, including the rest of Elder Yamashita’s questions and remarks from Sister Yamashita, at Church News.

I think my wife, Barbara, was born with a smile on her face. Everybody who knew Barbara, before she died two and a half...Posted by M. Russell Ballard on Wednesday, March 24, 2021

Recently I enjoyed a virtual young adult talent night. In these COVID times, it was great to have some fun together. (I...

We were each in our individual offices (having yet another meeting) when something hit me. My heart sped up just a...Posted by Michelle D. Craig on Friday, March 26, 2021