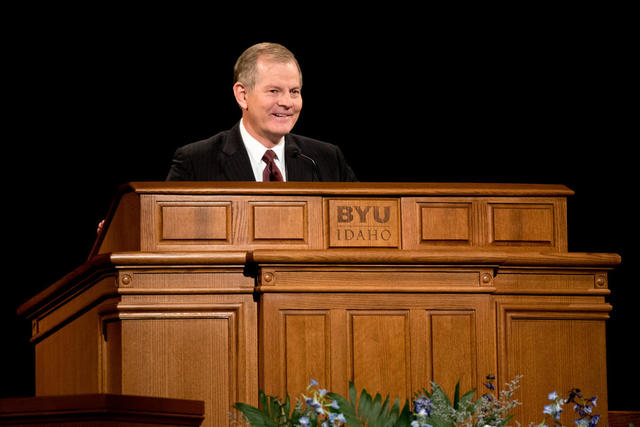 "On Sunday morning, Jan. 14, just over a week ago, the Council of the Twelve met in the upper room of the Salt Lake Temple in a spirit of fasting and prayer, under the presiding direction of President Russell M. Nelson, acting as Senior Apostle and President of the Quorum of the Twelve,” Elder Stevenson said.“In this sacred and memorable meeting, seated by seniority in a semi-circle of thirteen chairs, following a well-established precedent in unity and unanimity, hands were raised to first sustain the organization of a First Presidency and then to sustain President Russell Marion Nelson as the President of The Church of Jesus Christ of Latter-day Saints.”

The world has recently observed "a divine, sacred, solemn and orderly transfer of authority to exercise all priesthood keys from one prophet to another — a clear and continual legacy of succession," said Elder Gary E. Stevenson on Jan. 23.

“What we have witnessed these past weeks has only occurred 17 times in this dispensation,” he said.

Speaking to Brigham Young University–Idaho students during a devotional held on the Rexburg, Idaho, campus, Elder Stevenson of the Quorum of the Twelve Apostles shared his thoughts about this “tender time” in the history of the Church, during which one prophet passed away and another was ordained.

Elder Stevenson expressed his love and respect for President Thomas S. Monson, a man he described as “one of earth’s grandest inhabitants,” and recognized that more than 31,000 people paid tribute to President Monson the day of his viewing. In addition, thousands attended President Monson's funeral and even more watched the live broadcast online.

Elder Stevenson explained the process of calling a new prophet — saying that upon the last heartbeat of President Monson, the mantle of apostolic leadership passed to President Russell M. Nelson, who is now the senior living Apostle of God on the earth.