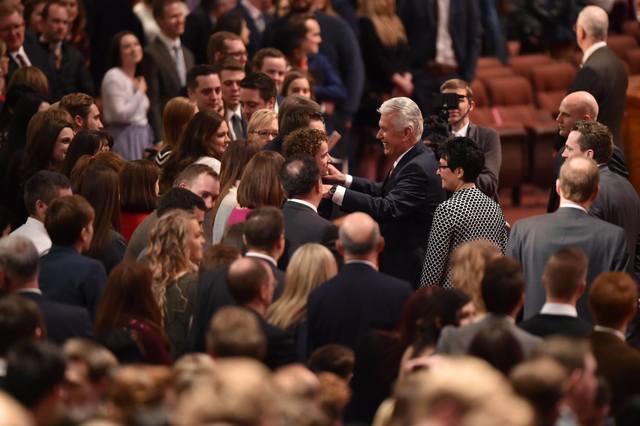 On Wednesday evening, Elder Dieter F. Uchtdorf responded publicly on Facebook addressing questions and concerns Church members raised regarding him no longer being a counselor in the First Presidency:

In the last couple of days, I have seen countless comments on social media and have heard many questions regarding how I feel now that I am no longer a counselor in the First Presidency. I appreciate your concern for my welfare, but I assure you, I’m just fine. 😃❤️

I love and support the First Presidency, and I am thrilled to again more closely associate with the other members of the Quorum of the Twelve Apostles.

Just after being called to the First Presidency in 2008, I delivered a talk in general conference titled “Lift Where You Stand.” During that address, I discussed the importance of seeing every calling we receive—no matter what it is—as an opportunity to strengthen and bless others and become what Heavenly Father wants us to become. I could give that talk again today and the words I shared would be just as relevant.

Just a few days ago, Harriet and I spoke to the young people of the Church and made specific reference to how we cannot connect the dots in our lives looking forward. We can only do so looking backward. In hindsight, each of us will see how the dots connect in our lives on a more elevated, spiritual level.One of my favorite quotes comes from President Gordon B. Hinckley, who said the following:

“Your obligation is as serious in your sphere of responsibility as is my obligation in my sphere. No calling in this Church is small or of little consequence. All of us in the pursuit of our duty touch the lives of others.”

My friends, let us work together on the task at hand—to help all of God’s children know that He has a plan for them and to let them know they can find true joy in the gospel of Jesus Christ.

I know that God is in charge. HE is at the helm. HE wants us to serve wherever we are in this beautiful worldwide Church. No matter where we are on this planet and to whichever calling we are assigned, let us do our best to serve God and our fellowman.

Tuesday morning, our prophet, President Russell M. Nelson, announced the reorganization of the First Presidency, detailing the inspiration he received before implementing these new changes.

After being sustained as our prophet in the temple, President Nelson says, "It then became my responsibility to discern who the Lord had prepared to be my counselors. How can I choose only two of the twelve apostles, each of whom I love so dearly? I am deeply grateful to the Lord for answering my fervent prayers."

With President Dallin H. Oaks serving as the first counselor and President Henry B. Eyring serving as the second counselor in the new First Presidency, President Nelson said of Elder Uchtdorf's service, "President Dieter F. Uchtdorf has resumed his place in the Quorum of the Twelve Apostles. He has already received major assignments for which he is uniquely qualified. I pay tribute to him and to President Eyring for their magnificent service. . . .

"Each is willing to serve now where he is needed most."

Elder Uchtdorf recently reemphasized this message in a touching testimony he wrote on Facebook, one which demonstrates his humility and desire to serve the Lord in any way.

It was a joy to participate in this morning’s announcement of the new First Presidency. I love and sustain President Russell M Nelson, President Dallin H Oaks, and President Henry B Eyring. I can assure you, the Lord Himself is at the head of His Church, even The Church of Jesus Christ of Latter-day Saints.

The Lord has provided a divine plan so that His Church is always led by prophets, seers, and revelators. I embrace the opportunity to associate with my Brethren in the Quorum of the Twelve Apostles. I love them and look forward to serving with them as we—along with you—strive to serve the Lord.

Other apostles also added their voices in testifying of our new Church leaders:

With the passing of President Thomas S. Monson, The New York Times and other major news outlets highlighted the lack of drama and politics involved in new Church leaders being called in the LDS Church. The structure of our Church and succession to the presidency is indeed unique in the world, and the humility, selflessness, and grace of our Church leaders demonstrates that this process is not dictated by the world but by our Heavenly Father, whom we all strive to emulate and follow.