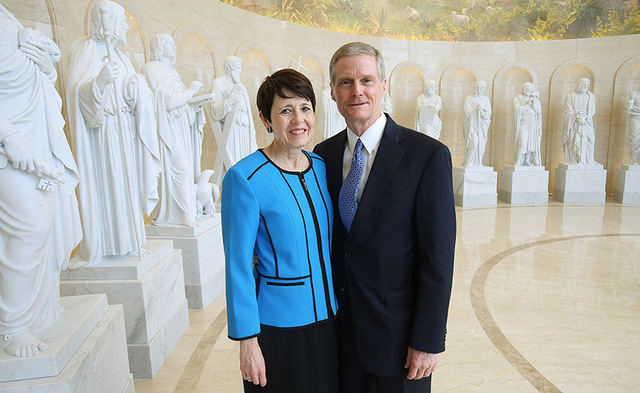 With all the recent announcements, temple dedications, and Church changes, this conference weekend will only add to the excitement of witnessing the continuation of the restoration in the latter days.

► You'll also like: First Presidency, Quorum of the Twelve Share Beautiful Testimonies of the Savior After Rome Temple Dedication

When Eaton tried to find out what some of what members can expect this conference by asking if more temple announcements are coming this weekend, Elder Bednar replied with only a "Stay tuned."

But while temple announcements and Church changes are definitely an exciting part of general conference, Elder and Sister Bednar revealed valuable insights into what matters most: they prepare spiritually to receive the messages from living prophets and apostles.

"One thing my husband has taught me that has been really rewarding and made conference more meaningful is take a question to conference," Sister Bednar told East Idaho News. "If you’re prayerful and seek divine guidance, that question will be answered. He also taught me that the brethren have a pattern they use as they speak and teach about doctrine and principles. During the course of the message, they usually invite us to do something, and then we should look for the promised blessings. Doctrines and principles are taught, invitations are given to act and then blessings come."

► You'll also like: One Powerful Promise or Invitation from Every Talk Given During the October 2018 General Conference

Elder Bednar also shared how the topics are chosen for general conference and how the collaboration of these messages are "orchestrated by heaven."

"As has been described on many occasions, we do not have assigned topics," Elder Bednar told East Idaho News. "I always find it miraculous to note the themes that emerge in each session of conference—knowing that those themes were orchestrated by heaven. I like to go back and consider the themes that emerged in previous conferences—the last conference, maybe the one before that—and see how those are linked to the points of emphasis that are developed in this conference."

At the end of the article, Elder Bednar also shared his testimony that it is through divine inspiration that all the exciting changes, announcements, and general conference messages are able to come about.

"We often attribute to a particular person or persons the credit for 'getting things done,'" Elder Bednar said. "But the truth is, the Lord hastens His work according to His will and His timing. It is not the people who to move this work forward—it is the Lord."

Read the rest of the interview with Elder and Sister Bednar on East Idaho News.