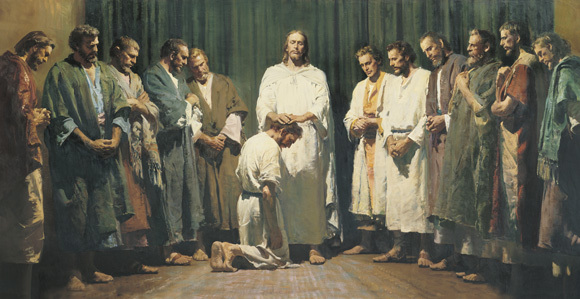 byElder and Sister Renlund, excerpted from "The Melchizedek Priesthood" | Mar. 17, 2018

Linguistically, some terms can be used to refer to a larger whole as well as to a part. Consider the term earth, which can mean both the planet on which we reside and the topsoil we push around in gardens. Certainly, the planet Earth encompasses garden topsoil, but garden topsoil does not encompass the planet Earth. Context usually makes the meaning clear.

Similarly, context usually makes the meaning of the word priesthood clear. However, misunderstandings can arise when people in and out of the Church equate priesthood ordination with the total priesthood power and authority of God.

Ordinances We Can Not Receive on Earth

Indeed, we may wish that Brother Brigham mentioned other things besides the keys of resurrection. He does, however, allude to other authority and power retained by God—the authority and power to produce bodies and spirits, create kingdoms, and organize matter [see note 3]. Referring to these statements by Brigham Young, President Spencer W. Kimball said that “we talk about the gospel in its fulness; yet we realize that a large part is still available to us as we prepare, as we perfect our lives, and as we become more like our God.”4

We must, therefore, recognize that God has conferred only a portion of His total priesthood power and authority.

“And when our spirits receive our bodies, and through our faithfulness we are worthy to be crowned, we will then receive authority to produce both spirit and body. But these keys we cannot receive in the flesh.

“We have not the power in the flesh to create and bring forth or produce a spirit [with all the vaunted knowledge of the experts in the world, this has not been given to man]; but we have the power to produce [with the help of God] a temporal body [for our children]. The germ of this, God has placed within us. . . . Herein, brethren, you can perceive that we have not finished, and cannot finish our work, while we live here [on the earth], no more than Jesus did while he was in the flesh.

“. . . fashion kingdoms [or] organize matter, for [that is] beyond our capacity and calling, beyond this world. In the resurrection, men who have been faithful and diligent in all things in the flesh, [who] have kept their first and second estate, and [are] worthy to be crowned Gods, even the sons of God, will be ordained to organize matter. How much matter do you suppose there is between here and some of the fixed stars which we can see? Enough to frame many, very many millions of such earths as this, yet it is now so diffused, clear and pure, that we look through it and behold the stars. Yet the matter is there. Can you form any conception of this? Can you form any idea of the minuteness of matter?”

For more in-depth insights into the priesthood, check out Elder and Sister Renlund's new book, The Melchizedek Priesthood.