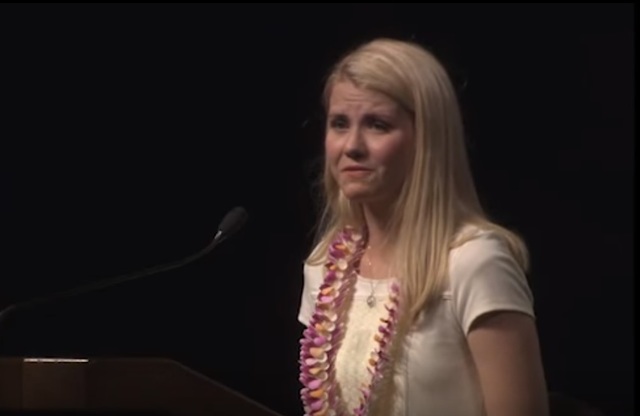 Elizabeth Smart: My Captivity Was the Hardest But Most Spiritual Time of My Life

*Editor's Note: This story summarizes some of the experiences Elizabeth Smart Gilbert shared from her personal life, including being kidnapped and raped when 14 years old. Some details may be disturbing to readers. Read at your own discretion.

"One of God's greatest blessings and gifts to us is the ability to choose," Elizabeth Smart Gilbert said at a fireside at BYU-Hawaii.

Gilbert shared many of the times in her life when she prayed to God in difficult times, needing to feel him near. She told of a time as a shy, young girl that she became lost, but she remembered the song "A Child's Prayer" that she had sung in Primary that week—something that helped her through that frightening time.

That habit, developed as a young girl, would later help Gilbert when she came face to face with unspeakable darkness and hardship.

One night, as a 14-year-old, Gilbert woke to a strange voice in her room saying, "I have a knife at your neck. Don't make a sound. Get up and come with me."

"I had never been so scared in my entire life," Gilbert said. "Up until that moment, I had always felt like I had been pretty prepared for anything I would come across . . . nothing had ever prepared me for anything like that before. I remember being so scared I felt paralyzed and I felt like I didn't have a choice."

Gilbert kept wondering what had happened to the rest of her family, not knowing who she could turn to. "The one thing I did know was that [my sister] was alive and she was still in bed." Filled with fear and a desire to protect her sister, Gilbert went with the man who took her up the mountains behind her house.

The whole way up the mountain, Gilbert recalls praying and remembering scripture stories of God miraculously saving Nephi or the Israelites and she waited for some miracle to save her. When she reached a grove of trees where the ground had been leveled and a tent set up, she wondered if somehow she had done something wrong or had overlooked her miracle.

Gilbert was led inside the tent where she was given a robe to wear. She kept thinking of her family and wondering how they were and what they were thinking and feeling.

"I remember being on this upturned bucket being so scared and so shaken," she shared. And that's when her captor came in. In her fear, she remembered very little of what he said, except, "I hereby seal you to me as my wife before god and his angels as his witnesses."

Having grown up singing "I Love to See the Temple" often as a little girl and always dreaming of one day marrying in the temple, this terrified Gilbert. "I remember screaming out 'No!' and he looked back at me and said, 'if you scream out like that again, I will kill you.'"

Gilbert tried to convince her captor of all the reasons he should let her go. But he refused to listen. "He kept saying to me, 'We now need to consummate our marriage.'"

But then Gilbert began to think of everyone and everything that was important to her, especially her mother. And she remembered something her mother once told her: that Heavenly Father loved Gilbert so much and always would, and that she love Gilbert so much and nothing would ever change that.

"I realized that I always had my Heavenly Father to turn to, and my Savior." In that darkness, Gilbert realized that she had something her captor couldn't take away from her: faith, hope, and a love that no one could destroy.

"There wasn't a single day I didn't pray. . . It was the hardest time of my life, without a doubt, but at the same time, it was one of the most spiritual times of my life because I felt my Savior's presence so strongly in my life."

After nine months of captivity, Gilbert was rescued and finally reunited with her family. "I knew Heavenly Father had saved me," she recalls. "That was the happiest moment of my life."