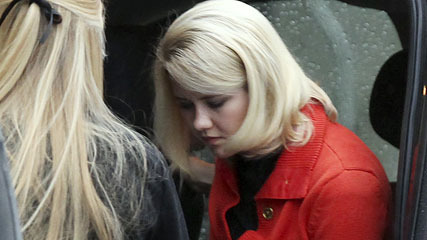 Elizabeth Smart took the stand today in the federal trial of her accused kidnapper and described how she awoke one night in June 2002 to feel a knife at her throat. The man holding it threatened to kill her and her family if she did not come with him, she said.

"He said he was taking me hostage, for ransom," Smart, now 23, testified, according to The Associated Press. "I was shocked. I thought I was having a nightmare."

Smart was the third witness to testify in federal court in Salt Lake City in the trial of Brian David Mitchell. The self-proclaimed profit "Immanuel" is accused of kidnapping Smart when she was 14 and repeatedly raping her during a captivity that lasted nine months.

Wearing a red jacket and black and white skirt, the blond young woman recalled the night she was abducted from the bedroom she shared with her little sister, Mary Katherine, then 9.

Read the rest of this story at aolnews.com