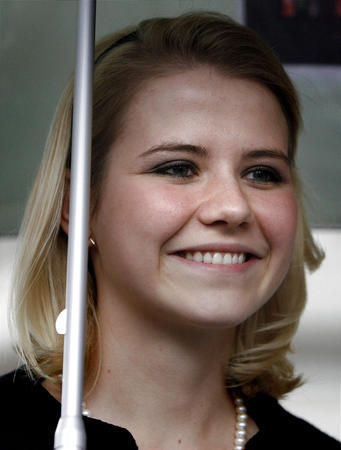 Friday, after a jury found Brian David Mitchell guilty of her kidnapping, Elizabeth Smart greeted reporters outside the federal court building in downtown Salt Lake City. Her radiant smile beamed in sharp contrast to the dreary rain that fell as she declared, “Today is a wonderful day!”

It’s a smile I will never forget.

I hoped for a guilty verdict—for some kind of justice and closure for the Smart family. And like millions of Americans, I breathed a sigh of relief when the verdict came down. But because of all that Elizabeth has been through, more than most of us can even begin to comprehend, I was surprised to see her smiling. But there she was, confident and gracious, sharing her extremely personal victory with the world.

To not only face her abuser but also to recount her nightmare in graphic detail, knowing that every word would make its way into the press, exhibits courage and composure beyond her years. It’s clear to me that Elizabeth has not allowed her terrifying ordeal to define her. Although she has been victimized, she does not live her life as a victim. Instead, she stands as an example, showing us all that it is possible to push beyond our darkest moments, whatever they may be. And for that, I will be forever grateful to her.

Brian David Mitchell will be sentenced on May 25, 2011. Whether or not he receives a life sentence for his crimes, I hope she will feel that justice has been served. And I hope her life will be filled with countless smiles and many more wonderful days.