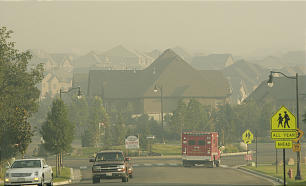 Folks living in the Herriman Utah Rose Canyon Stake likely began their Sabbath on Sept. 26 with the typical Sunday concerns: getting the children dressed for Primary, maybe making some last minute tweaks to the Relief Society lessons or perhaps scheduling some final home teaching visits.

Implementing the stake's emergency preparedness plan was not part of the day's schedule. Still, by day's end, that plan was in full effect. When an afternoon wildfire was sparked in the dry hills above the stake, many of the members had just minutes to gather up a few precious items and get out of their homes. An evacuation order in the stake and neighboring communities left members with little time to organize.

Fortunately, most of the organizing had already taken place. Long before the first sign of fire, stake and ward leaders had developed emergency response plans and established relationships with local public safety agencies. Civic and Church emergency response officials have saluted the Herriman Utah Rose Canyon Stake and its leaders for having a well-organized stake emergency plan that allowed for a timely evacuation and reliable communication during the harried moments when it appeared the fast-moving blaze might spread into their homes and meetinghouses.