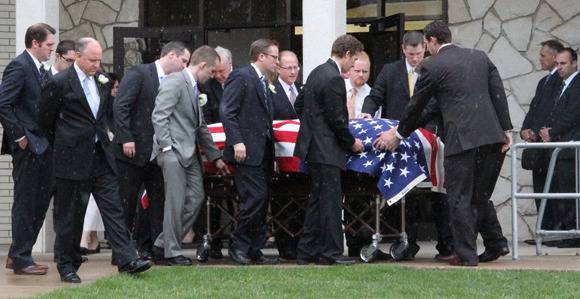 Elder H. Burke Peterson, emeritus General Authority who died April 14 at the age of 89, was remembered as a wonderful father and faithful disciple of Jesus Christ during a funeral on April 20.

“Elder Peterson’s life was a model of diligence and hard work,” said Elder M. Russell Ballard of the Quorum of the Twelve. “His devotion as a husband, father, grandfather, and great-grandfather and stalwart servant of the Lord influenced the lives of loved ones and all with whom he came in contact.”

Friends and family gathered in the Bountiful Hills Ward building in the Bountiful Utah Central Stake to remember their friend and Church leader, Elder Peterson, who served as a member of the First Quorum of the Seventy from 1985 to 1993 and as a counselor in the Presiding Bishopric from 1972 to 1985.