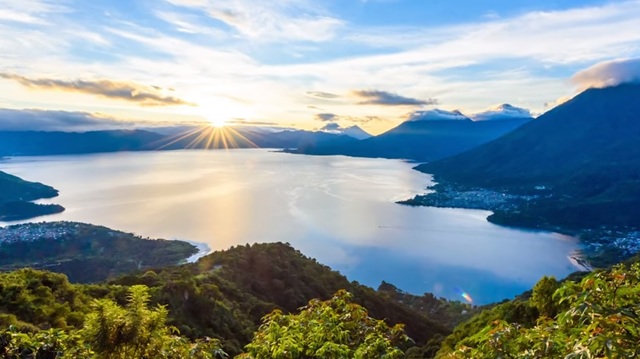 After the great destruction which was recorded in 3 Nephi, the Lord’s voice was heard among the people, declaring that the “great city Moroni have I caused to be sunk in the depths of the sea, and the inhabitants thereof to be drowned” (3 Nephi 9:4). The cities of Onihah, Mocum, and Jerusalem suffered similar fates. Concerning them, the Lord declared that “waters have I caused to come up in the stead thereof” (v. 7).

Some may wonder, based on these passages, if there is any evidence that cities were flooded in this manner in the ancient Americas. In the 1990s, Roberto Samayoa noticed ruins on an underwater plateau while he was scuba diving in Lake Atitlan, located in the highlands of Guatemala. The site was named Samabaj, which is partly derived from Roberto’s own last name, and eventually trained archaeologists began to seriously study the area.1 A geophysical survey using side sonar scanning revealed even more man-made structures at other underwater locations along Lake Atitlan’s southern shore.2

Concerning Samabaj, anthropologist John Sorenson noted that the “buildings appear to have been undamaged before their submersion, implying a sudden rise of the water.”3 Journalist Roger Atwood called it an “underwater time capsule unmolested by looters and untouched by urbanization.”4

Researchers have found “about 30 ancient homes, a plaza, staircases, and even saunas, among the submerged ruins of Samabaj.”5 It also features “no fewer than 16 religious structures,” including “at least seven stelas, standing stone markers that often signified power and authority in antiquity.”6 Sonya Medrano, an archaeologist involved with the site’s recent underwater excavation and mapping, has described it as “a place of public rituals and pilgrimage.”7

The sudden rise in water, which left the 30-acre island submerged under 12 to 30 meters of water, was likely due to local volcanic activity.8 Based on ceramic remains, Sorenson felt that the ruins were from the “Late Pre-Classic period, probably around the time of Christ,”9 and Medrano dated “the island’s moment of destruction to no later than A.D. 300.”10

Samabaj offers a perfect example of the type of destruction experienced by the cities of Onihah, Mocum, and Jerusalem, as explained by the voice of the Lord. Rather than sinking into the sea or having a flash flood come crashing down upon them from above, the Lord declared that “waters have I caused to come up in the stead thereof” (3 Nephi 9:7; emphasis added). This is exactly what happened at Samabaj—the water level of its surrounding lake quickly arose and submerged it. This underwater settlement, which until recent times lay undetected at the bottom of a popular resort lake, demonstrates that the type of flooding mentioned in 3 Nephi is anything but farfetched.

Interestingly, long before the discovery of Samabaj, several LDS scholars identified the region of Lake Atitlan with the waters of Mormon and placed Jerusalem, one of the sunken cities, near its shores.11 It remains uncertain, however, if Samabaj and its sudden flooding had anything to do with Book of Mormon peoples or the destruction reported in 3 Nephi.

After discussing the symbolic and religious significance that Samabaj’s destruction may have held for its inhabitants, Atwood asked, “Did the ancient Maya know why the island was disappearing?”12 It may be similarly relevant to ask if Book of Mormon peoples knew why their cities were being covered with water. From heaven, the Lord’s voice was heard among the people, explaining that this was done “to hide their wickedness and abominations from before my face, that the blood of the prophets and the saints shall not come up any more unto me against them” (3 Nephi 9:7).

This reasoning is actually quite similar to the Lord’s justification for sending the flood in Noah’s time. In Moses 6:28 the Lord explained to Enoch that He would send the flood because “in [the people’s] own abominations have they devised murder, and have not kept the commandments.” These “abominations” were first introduced by Cain, who slew his brother Abel (Moses 5:25). In response to Cain’s murder, the Lord declared, “The voice of thy brother’s blood cries unto me from the ground” (v. 35).

Thus, in both accounts, the floods were sent because of “abominations” which are scripturally linked with the shedding of innocent blood—blood which symbolically calls out from the ground for divine justice.13 The Lord wanted the people to understand that He was bound by His own law to exact justice for the spilling of innocent blood. The rising waters symbolically hid the people’s wickedness and abominations from before the face of the Lord,14 while at the same time cleansing the earth from sin.15