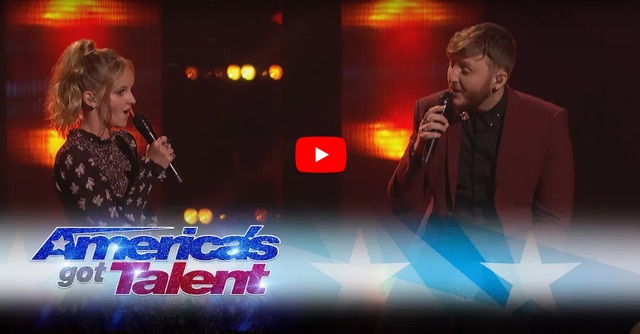 On the final show of this season's America's Got Talent, Evie Clair sang a beautiful duet with X-Factor champion James Arthur. The two sang an original song written by Evie Clair, "Okay Day."

Though Evie did not win the America's Got Talent competition, she secured the ninth spot.

Throughout the competition, Evie has stood for her faith while singing for her father as he battled stage 4 cancer. Evie's father, who passed away earlier this month, was Evie's inspiration to return to the show.

On America's Got Talent, Evie said, “My dad taught me after I started something to always finish it. That’s why I’m fighting to the end, just like he did.” But what didn't make it on the show were some of the more spiritual aspects of Evie's performance and her journey.

Evie told Entertainment Tonight, “I just prayed before that I would be able to do that. . . . I feel like I really had strength from God, and I know my dad was there.”

After her father's death, Evie posted a photo on Facebook testifying that families are forever. During the funeral, Evie and her sister, Kirra, sang a medley written by their mother, testifying of this fact. And while Evie could not sing at the start because of her tears, her little sister's voice and courage helped her through. (Here's a music video of the song, created by Evie and Kirra last year).

While these moments are beautiful and emotional, one thing that has amazed me about Evie Clair is how she lives her faith in the small moments, when no one is watching. "The whole staff here at America’s Got Talent is now well versed in all things Evie Clair. They know she has special dress standards and that she needs Sunday mornings off for church," Hillary Abplanalp writes. In fact, the woman over wardrobe told Hillary she often buys two skirts for Evie, to make sure there is extra fabric in case they need to make adjustments.

Even with rehearsals, her father's funeral, and traveling from her home in Arizona to California, Evie still makes time to attend church and focus on the gospel. Just this past Sunday, before her final performance later that week, Evie Clair was asked if she would give an impromptu talk in a ward in Hollywood. Despite all she is going through, Evie agreed, testifying of the truth of eternal families.

According to her mother, Evie does not anticipate winning America's Got Talent. In fact, she is not even a frontrunner. But Evie "loves the other contestants dearly and will be so happy no matter who takes home the prize," her mother writes.

About why Evie decided to return to America's Got Talent, even when she is not expected to win, Hillary illustrated the reasons in this touching story about the day of the funeral:

"Evelyn has had a hard day. Halfway through two different interviews she broke down and ran away. She would do fine until they would ask specific questions about her dad and then she would go silent. . . . I was really proud of her for pulling herself together in both instances to continue the interviews saying her dad didn’t teach her to be a quitter."

On her family blog, Hillary shares these and many more powerful moments where their family has seen faith shine through the grief. Just this past week, she wrote:

I was reminded by a friend that Clair means light and in some languages it means famous. Both seem appropriate for sweet Evie Clair. She has been a light to me through the darkest days of my life. She is a leader who only watches her own lane unless there is an opportunity to lift someone else. She reminds me of my mom and grandmother who also have the name Clair.

Tonight Howie also spoke of light. After her performance he said, “Before I tell you what I think of that, I just wanna say that our hearts and our souls go out to you, Evie. I know that your father passed this week, and I cannot believe the strength that I’m seeing in such a beautiful young girl, and this is a very dark time in your life, and we all go through dark times. What gets us through is hoping and praying for that light at the end of the tunnel and your voice, and your song, and your presence here is that light at the end of the tunnel, so thank you so much.” . . .

My gratitute tonight is to my Heavenly Father and His Son who is the true Light of the World. Evie Clair is only reflecting that source. A mother couldn’t ask for more from her children.