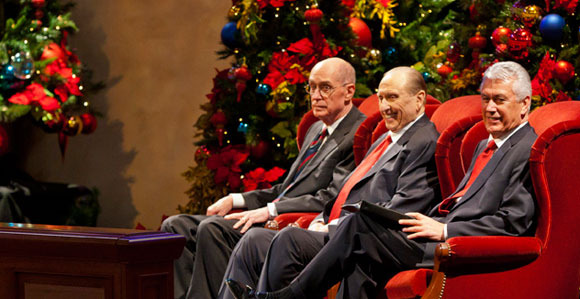 Evolution of the Christmas Devotional from 1984 to 2014

The First Presidency’s Christmas Devotional, held last Sunday, is the most recent installment in a decades-long tradition in The Church of Jesus Christ of Latter-day Saints. The devotional began as a way for Church leadership to celebrate the season with Church employees and has evolved into the worldwide broadcast. This year’s event drew thousands of viewers from around the world.

Though the devotional has been held for decades, it has grown and changed notably in just the last 30 years. Here’s a side-by-side comparison of Sunday’s devotional and the one in 1984.

From 1994 until 2013, all three members of the First Presidency spoke at the annual First Presidency Christmas Devotional. Beginning last year, Church leaders from other quorums and general auxiliary presidencies have again been invited to speak.