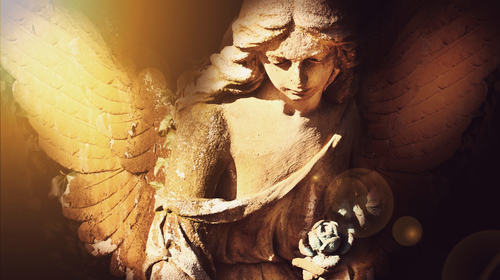 For more information on this topic read "The Ministry of Angels," by Jeffrey R. Holland, Ensign, November 2008, 29-31.

In times of special need, [the Lord] sent angels, divine messengers, to bless His children, reassure them that heaven was always very close and that His help was always very near.

Or have angels ceased to appear unto the children of men? Or has he withheld the power of the Holy Ghost from them? Or will he, so long as time shall last, or the earth shall stand, or there shall be one man upon the face thereof to be saved?

Give each family member a piece of paper and pencil and ask them to draw an angel. Have them show their drawings to the rest of the family and discuss briefly what angels look like. Tell your family that Joseph Smith taught, "An angel of God never has wings" (History of the Church, 3:392). Have one family member read the section heading and another family member read D&C 129:1-3. Ask:

Share the following insights concerning the ministering of angels:

"The veil between heaven and earth usually hides the angels from our sight. Yet often in the early stages of our spiritual development, we may experience unmistakable contact with the angels of the unseen world" (Bruce C. Hafen, Ensign, April 1992, 12).

"One of the things that will become more important in our lives the longer we live is the reality of angels, their work and their ministry. I refer here not alone to the angel Moroni but also to those more personal ministering angels who are with us and around us, empowered to help us and who do exactly that" (Jeffrey R. Holland, Ensign, January 1996, 12).

Invite family members to strive to live so they can better discern the importance of angels in their lives, both seen and unseen.

[While serving as Mission President in Russia], we saw indications that the Lord's spiritual emissaries had already been there before us, preparing specific people for the coming of the missionaries. For example, the four missionaries who opened Kharkov baptized in their first few weeks a number of converts who had considerable leadership abilities. I took occasion during my first monthly visit to Kharkov to interview a number of these wonderful new converts. I was amazed and humbled to hear so many of them tell me sacred experiences - events that had helped prepare them to recognize and receive the restored gospel - that had happened to them just before the arrival of the missionaries.

The same was true for members in other cities we visited. In Odessa, as in Kharkov, a large number of choice people, many of whom would be future leaders, were baptized during the first two months. Again, as I interviewed new converts, they volunteered to share the same kind of sacred personal experiences as those discussed above. Similarly, remarkable spiritual experiences occurred in Minsk. The pattern of events became so predictable that as each set of missionaries was sent to open a new city, I felt I could promise them that angels were already there. I encouraged them to live close to the Spirit so that the Lord could bring to them those whom he had prepared.

When the Lord's servants are clean, seek to know his will, and learn to recognize and obey his promptings, fearing not to act as he has inspired them to act, he is able to work great miracles through their efforts.

From what I have seen, I am certain that the Lord makes the same promise to missionaries opening new cities in our day that he made to the Apostle Paul and later to the Prophet Joseph Smith: "For I am with thee, and no man shall set on thee to hurt thee: for I have much people in this city" (Acts 18:10).

If the object is difficult to find, the players can ask for help. The person who hid the object then tells the players, based on how close they are to the object, whether they are hot or cold. When everyone has found the hidden object, the person who found it first gets to hide it, and the game continues.