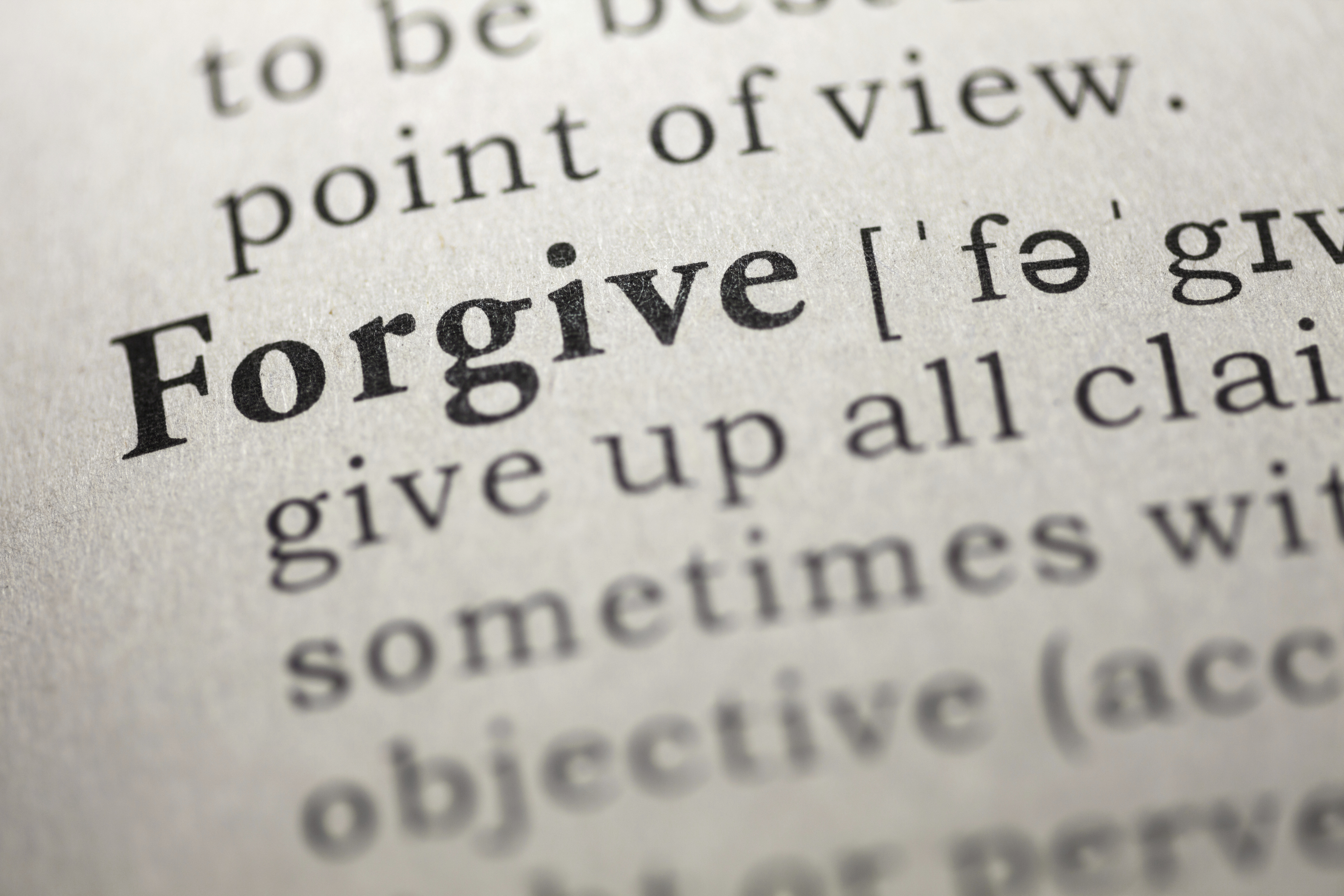 Forgiveness should go hand in hand with love. In our families, as well as with our friends, there can be hurt feelings and disagreements. Again, it doesn’t really matter how small the issue was. It cannot and should not be left to canker, to fester, and ultimately to destroy. Blame keeps wounds open. Only forgiveness heals.

I am acquainted with a family which came to America from Germany. The English language was difficult for them. They had but little by way of means, but each was blessed with the will to work and with a love of God.

Their third child was born, lived but two months, and then died. Father was a cabinetmaker and fashioned a beautiful casket for the body of his precious child. The day of the funeral was gloomy, thus reflecting the sadness they felt in their loss. As the family walked to the chapel, with Father carrying the tiny casket, a small number of friends had gathered. However, the chapel door was locked. The busy bishop had forgotten the funeral. Attempts to reach him were futile. Not knowing what to do, the father placed the casket under his arm and, with his family beside him, carried it home, walking in a drenching rain.

If the family were of a lesser character, they could have blamed the bishop and harbored ill feelings. When the bishop discovered the tragedy, he visited the family and apologized. With the hurt still evident in his expression, but with tears in his eyes, the father accepted the apology, and the two embraced in a spirit of understanding. No hidden wedge was left to cause further feelings of anger. Love and acceptance prevailed.

(Read the rest of the talk here.)

Another great story of forgiveness is that of Chris Williams. This Latter-day Saint showed true Christlike character by forgiving and befriending the young man who caused an accident that killed Williams’ wife, unborn baby, nine-year-old daughter, and eleven-year-old son.

If you aren't familiar with the story, we recommend you read it in his own words. Brother Williams' book, Let it Go, is guaranteed to inspire you to let go of grievances that may be weighing you down. (See the end of this article for more info.)

The stories of the German father and Chris Williams give great examples of forgiving when most would say they were entitled to hold grudges. In the case of Brother Williams, it resulted in healing and love, affecting himself, his family and friends, his community, and people everywhere who hear his story and take it to heart. The German father’s forgiving nature has blessed his countless descendants, who might not have the gospel in their lives today had he blamed the bishop and left the Church.

Forgiveness heals and blesses all around you. Holding grudges does nothing but add misery to an already tragic situation. There is a saying: “Holding onto anger is like grasping a hot coal with the intent of throwing it at someone else. You are the one who gets burned.”

President James E. Faust spoke about this in his talk, “The Healing Power of Forgiveness” (April 2007 general conference).

Most of us need time to work through pain and loss. We can find all manner of reasons for postponing forgiveness. One of these reasons is waiting for the wrongdoers to repent before we forgive them. Yet such a delay causes us to forfeit the peace and happiness that could be ours. The folly of rehashing long-past hurts does not bring happiness.

Some hold grudges for a lifetime, unaware that courageously forgiving those who have wronged us is wholesome and therapeutic.

Forgiveness comes more readily when [...] we have faith in God and trust in His word. Such faith ‘enables people to withstand the worst of humanity. It also enables people to look beyond themselves. More importantly, it enables them to forgive.’

Even if our offenders don’t apologize or feel remorse for their actions, we can’t let ourselves become weighed down and crippled with anger.

The Savior was the perfect example. He walked in holiness and only spoke the truth. Some took offense from His words when none was intended, losing their chance to seek repentance and learn from the Savior face-to-face.

And when wicked men beat and crucified Him, who was perfectly innocent, Jesus Christ held no anger in His heart but said, “Father, forgive them, for they know not what they do” (Luke 23:34).

If He, who never did wrong, could forgive those who wronged Him, how much more are we, who are guilty of our own wrongdoings, expected to forgive others of their faults?

This principle is beautifully illustrated in the Parable of the Unmerciful Servant (Matthew 18: 23-35):

23 ¶Therefore is the kingdom of heaven likened unto a certain king, which would take account of his servants.

24 And when he had begun to reckon, one was brought unto him, which owed him ten thousand talents.

25 But forasmuch as he had not to pay, his lord commanded him to be sold, and his wife, and children, and all that he had, and payment to be made.

26 The servant therefore fell down, and worshipped him, saying, Lord, have patience with me, and I will pay thee all.

27 Then the lord of that servant was moved with compassion, and loosed him, and forgave him the debt.

28 But the same servant went out, and found one of his fellowservants, which owed him an hundred pence: and he laid hands on him, and took him by the throat, saying, Pay me that thou owest.

29 And his fellowservant fell down at his feet, and besought him, saying, Have patience with me, and I will pay thee all.

30 And he would not: but went and cast him into prison, till he should pay the debt.

31 So when his fellowservants saw what was done, they were very sorry, and came and told unto their lord all that was done.

32 Then his lord, after that he had called him, said unto him, O thou wicked servant, I forgave thee all that debt, because thou desiredst me:

33 Shouldest not thou also have had compassion on thy fellowservant, even as I had pity on thee?

34 And his lord was wroth, and delivered him to the tormentors, till he should pay all that was due unto him.

35 So likewise shall my heavenly Father do also unto you, if ye from your hearts forgive not every one his brother their trespasses.

We feel free when we repent and are forgiven of our own sins. We can’t deny others that same freedom.

The Lord has repeated this principle frequently, as told in the scriptures:

Wherefore, I say unto you, that ye ought to forgive one another; for he that forgiveth not his brother his trespasses standeth condemned before the Lord; for there remaineth in him the greater sin (D&C 64:9).

Thou shalt not avenge, nor bear any grudge against the children of thy people, but thou shalt love thy neighbour as thyself: I am the Lord (Leviticus 19:18).

Then came Peter to him, and said, Lord, how oft shall my brother sin against me, and I forgive him? till seven times?

Jesus saith unto him, I say not unto thee, Until seven times: but, Until seventy times seven (Matthew 18:21-22).

We must recognize that we are all imperfect--that we are beggars before God. Haven’t we all, at one time or another, meekly approached the mercy seat and pleaded for grace? Haven’t we wished with all the energy of our souls for mercy--to be forgiven for the mistakes we have made and the sins we have committed?

Because we all depend on the mercy of God, how can we deny to others any measure of the grace we so desperately desire for ourselves? My beloved brothers and sisters, should we not forgive as we wish to be forgiven? (President Uchtdorf, “The Merciful Obtain Mercy”, April 2012 general conference)

No matter how small or large the hurt is, we have been commanded to forgive and forget, as the Lord forgives and forgets our own sins. When we take this principle to heart, we will feel freer and happier, and we will show those around us what it means to have charity, the pure love of Christ.

After teaching your family about forgiveness, have everyone think of a grudge they’re still holding in their heart. Provide paper and pencils, and have each person write down what happened and how it makes them feel. Then tear the papers up, bury them in your yard, or come up with your own way to let go of the offense.

If anyone feels like sharing what they wrote or needs help moving past the grievance, discuss as a family what you can do to forgive people who have offended you. Talk about how much better you’ll feel if you don’t let the offense take root in your heart.

(For more FHE ideas, check out our Facebook page!)

For inspiring examples of forgiveness, read these books.

Let it Go by Chris Williams

On a cold February night in 2007, a devoted father of four and a seventeen-year-old drunk driver both received life sentences. In one violent, devastating instant, both faced a drastically different—and uncertain—future. But as Chris Williams sat in his demolished vehicle, staring at the car that had just caused the death of his wife, his unborn baby, his nine-year-old daughter, and his eleven-year-old son, he committed to do something extraordinary: he would forgive.

Chris's message of forgiveness is an empowering invitation to all who have suffered, however unjustly, to lay down their burdens and let it go.

“We always have a choice when we are wounded. We can pass the pain on or return it. Or we can metabolize it and treat others differently than we’ve been treated.”

Using real life examples and stories from the scriptures, bestselling author Virginia H. Pearce reveals that the greatest wounds we inflict are often those we have no idea that we are inflicting. But when we forgive others, we mirror God’s mercy to us.