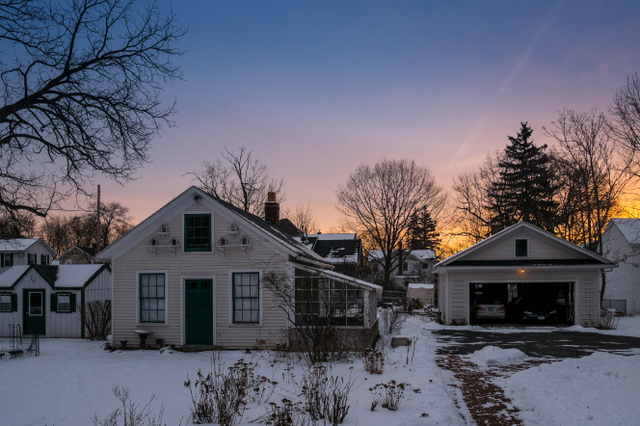 Whether or living space is large or small, humble or extravagant, there is a place for gospel priorities in each of our homes.

". . . set in order [your] family, and see that they are more diligent and concerned at home, and pray always, or they shall be removed out of their place."

Take the entire family to another room in the house. Tell them they have thirty seconds to look at and try to remember everything they can in the room. After the thirty seconds is up, have them return to the room where family home evening is being held.

Starting with one of the family members, have him name one thing in the room. He will need to be specific. (For example, if he says there was a shirt, he must also tell where it is located and what color it is.)

Play then rotates to the next person in the family. He should correctly name and describe something else in the room. Continue until no one can name another item or until everyone has had a predetermined number of turns.

Discuss what makes your home special. Ask:What is your favorite room in the house? If we were to move tomorrow, what one thing would you miss most about our house? If you could change one thing about our house, what would it be? Then discuss how you can make your home a place of love, peace and refuge from the world.

When I first visited Czechoslovakia, accompanied by Hans B. Ringger, regional representative, long before the freedom bell sounded, I was met by Jiri Snederfler, our leader through this dark period, and Olga Snederfler, his wife. I went to their home in Prague, where the branch met. Displayed on the walls of the room in which we assembled were picture after picture of the Salt Lake Temple. I said to Sister Snederfler, "Your husband must truly love the temple."

We sat down for some soup Sister Snederfler had prepared, after which she brought out a treasure trove: an album containing individual pictures of the missionaries who were serving there in 1950 when the government edict came for the mission to be closed. As she slowly leafed through the pictures of different missionaries, she would say, "Wonderful boy. Wonderful boy."

Brother Snederfler had been a courageous Church leader in Czechoslovakia and had been willing to put everything on the line for the gospel. When the opportunity came that we would seek recognition for the Church in that country, the government leaders, then Communist, said, "Don't send an American. Don't send a German. Don't send a Swiss. Send a citizen of Czechoslovakia."

There were ominous implications in that particular statement, because to have admitted that you were a church leader during this period of the prohibition of religion could mean imprisonment. And yet this call came to Brother Snederfler to be the designated person to go before the government and to state forthrightly that he was the leader of The Church of Jesus Christ of Latter-day Saints for all of Czechoslovakia and that he was seeking recognition for his church. He later told me that he had been somewhat frightened and had asked for the prayers of his brothers and sisters in the Prague Branch. He went to his sweet wife, Olga, and said to her, "I love you. I don't know when, or if, I'll be back; but I love the gospel, and I must follow my Savior. Pray for me."

With that spirit of faith and devotion, Brother Snederfler went before the government officials and acknowledged that he was the leader of the Church and that he was there to seek a restoration of the recognition the Church had enjoyed long years before.

In the meantime, Elder Russell M. Nelson had been working tirelessly to bring about the desired decision. Later Brother Snederfler heard the good news: "Your church is again recognized in Czechoslovakia." How eager Brother Snederfler was to tell his dear wife and the other stalwart members of the Church the wonderful news that once again missionaries could come to Czechoslovakia and the Church could provide a haven for freedom of worship in that nation. It was a happy day for Czechoslovakia.

In 1991 Jiri and Olga Snederfler responded to their calls to serve as temple president and matron of the Freiberg Germany Temple, which faithful members of the Church in Germany, Czechoslovakia, and surrounding nations attend. These two saintly souls found themselves each day in the Lord's house they so dearly loved.

For this game you will need a set of children’s blocks for stacking. Blocks of different shapes and sizes would be more fun.

Divide the family into two teams. Have the teams alternate in stacking blocks, one block in each turn, on top of each other until the stack of blocks tips over. The team that causes the blocks to tip over receives no points. The other team receives five points. Play a few times.

Play the game over again, but this time have only one team, the whole family working together. When family members do it this way, the stack of blocks should go higher before tipping over.

When we work together, we can "build" a better "house."

In a heavy saucepan, combine all ingredients. Cook, stirring constantly, until sugar is dissolved. Then cook over medium-high heat, stirring as little as possible, to 260degrees on candy thermometer, or until a little mixture, dropped into cold water, forms a hard ball. Remove from heat and pour onto buttered shallow pan or platter to cool. When cool enough to handle, pull with buttered fingers until taffy is satin smooth and ropy. Cut into bite-size pieces with buttered scissors, and wrap in wax paper, if desired. Makes 1 1/2 pounds of candy.