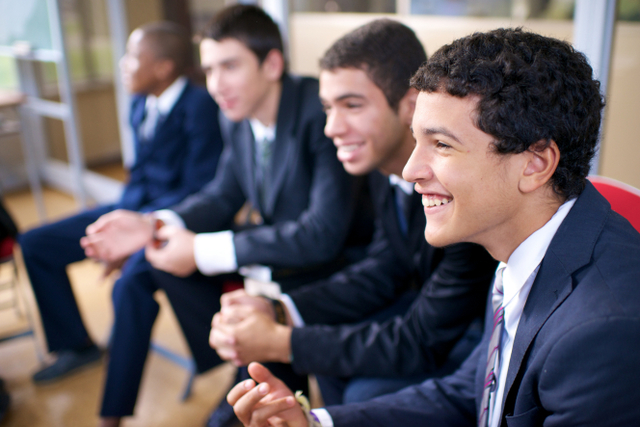 "A quorum is a class, a brotherhood, and a service unit: a class where a man may be taught the gospel of Jesus Christ; a brotherhood where we can strengthen, build, lift, and friendship each other; and a service unit to give service to quorum members and others" (Michael A. Neider, "Revealed Quorum Principles," Ensign, May 2009, 14-16).

"And let every man esteem his brother as himself, and practice virtue and holiness before me"(Doctrine and Covenants 38:24).

Tell your family that a detailed list of priesthood quorum duties is found in D&C 20:38-59. If possible, divide your family into four groups. Assign each group to find and make a list of the duties of one of the following priesthood offices:

When each group has completed their list, collect all the lists and play the game "Who am I?" Read the duties from their lists and see who can guess which priesthood office is being described (Dennis H. Leavitt and Richard O. Christensen, Scripture Study for Latter-day Saint Families: The Doctrine and Covenants, [Salt Lake City: Deseret Book, 2004], p. 41).

"My Counselors and I Did the Whole Thing" by Bishop H. Burke Peterson

Father was the superintendent of the Sunday School. He would take us, my brother and me, as little boys with him very early Sunday morning. It was our job to put the song books on the benches. My little brother couldn't carry the heavy books, so I carried the books and he lifted them off. . . .

I remember vividly my first experience passing the sacrament. I was frightened. I was afraid I would make a mistake. Mother had dressed me with a tie and the very best clothes I had. I was impressed with the opportunity to pass the sacrament. . . . When I was called as a deacons quorum president, I had a sit-down conversation with the bishopric. They made it a very important call. When I took charge of my first meeting I was afraid, but confident because of the way I was called to preside over the quorum. Later I was president of the teachers quorum, but one of the greatest lessons I learned was as president of the elders quorum. I learned about delegation and brotherhood.

The first party we planned, my counselors and I did the whole thing. When we got to the party there were only two or three others. From then on we delegated and were able to accomplish a great deal. One summer the quorum built a house in three months. The quorum built the whole thing and it was sold to help a boy on a mission.

I know the Lord guides his church and its leaders. There were times, as bishop, when I felt impressed to do something or see somebody. I didn't know why until I did what I was impressed to do and then I could see I was needed. There is a lot to be learned about obedience.

Application: When churches are not properly organized they "go all to pieces." The head bone should be connected to the neck bone, and so on.