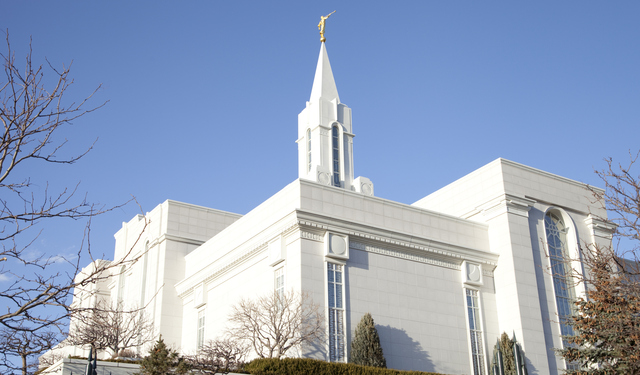 The high standards of temple building employed by this Church are a type and even a symbol of how we should be living our own lives. (Scott D. Whiting, “Temple Standard,” Ensign, Nov. 2012, 37.)

And even so I have sent mine everlasting covenant into the world, to be a light to the world, and to be a standard for my people, and for the Gentiles to seek to it, and to be a messenger before my face to prepare the way before me.(Doctrine and Covenants 45:9)

Give one family member an envelope containing these instructions: “Stand in front of the family like a statue. Do not bend, blink, smile, or react to anything that is said or done to you for sixty seconds. If you are successful, you will be rewarded.”

• How did you feel when everyone was against you?
• How were you able to be successful, or why did you bend or react?
• How is this activity like the peer pressure you sometimes face?
• Why do you think it is important not to bend or give into worldly standards?

Share the following statements: “You don’t need to compromise your standards to be accepted. . . . The more obedient you are, the more you stand for true principles, the more the Lord can help you . . . . You can also help others because they will feel your strength. Let them know about your standards by consistently living them” (Elder Richard G. Scott, Ensign, Nov. 1994, 37).

“We live in a world of so much filth. It is everywhere. It is on the streets. It is on television. It is in books and magazines. . . . It is like a great flood, ugly and dirty and mean, engulfing the world. We have got to stand above it. . . . The world is slipping in its moral standards. That can only bring misery. The way to happiness lies in a return to strong family life and the observance of moral standards, the value of which has been proven through centuries of time” (President Thomas S. Monson, Ensign, May 2002, 100).

• How can you help your family, or how can they help you, stand firm to your standards?
• What other helps are available to us as we seek to stand strong in the faith?
• When have you been successful at resisting the temptation to follow the crowd in doing wrong?

Share some blessings you have received by obeying the Lord’s commandments and not compromising your standards. Challenge your family to support each other in this cause, and give each family member a reward from the earlier “statue activity.” (Dennis H. Leavitt and Richard O. Christensen, Scripture Study for Latter-day Saint Families: The Old Testament, [Salt Lake City: Deseret Book, 2009], p. 154.)

Deacons shoot the [basket]ball to the same hoop the high priests do. That’s the standard. If I were to come to your ward, or you were to come to mine and measure the distance between the floor and the rim, we’d both come up with the same answer—ten feet. That’s the standard. In the game of basketball we don’t adjust the standard based on a player’s height. High school, NCAA, or NBA, deacon or high priest, it’s ten feet. We call them basketball standards, not basketball variables.

In the chapel, the bishop has a little switch to raise or lower the pulpit based on the height of the speaker. Imagine what it would be like if, in the NBA, the rim were raised or lowered each time a different player had the ball.

Similarly, we don’t adjust the standards to accommodate our own weaknesses. Rather than changing the commandments, the gospel requires us to change ourselves, to adjust ourselves to the standard. That’s one of the reasons I love basketball: whether you’re five-foot-six or six-foot-five, the standard is ten feet.(John Bytheway, Sports: Life Lessons from Court, Field, and Gridiron, [Salt Lake City: Deseret Book, 2009], p. 15.)

Give each person five washers (or pennies) and have him toss one for each turn from behind a line five feet from the goal. The person who gets his washer across the line, but the closest to it, wins all the washers tossed during that turn. The person who has the most washers after five turns wins.

Preheat oven to 350 degrees. Roll out one crescent roll for each apple piece. (You can roll outthe crescent roll with a drinking glass if you don’t have a rolling pin.) Then wrap the dough aroundthe apple quarters. Pinch the seams closed as much as possible. (It’s fine if there are exposed piecesof apple.) Place each apple bundle seam-side down in a baking dish. Pour melted butter over the apple bundles. In a small bowl, combine sugar,cinnamon, and nutmeg, then sprinkle the mixture over the buttered apples. Pour half of the lemon-lime soda over the mixture. (You can drink or discard the rest.)

Bake until browned and bubbly,about 10 to 12 minutes. Serve hot with vanilla ice cream or whippedcream. Serves 8.

Get the PDF version of "FHE: Standards."