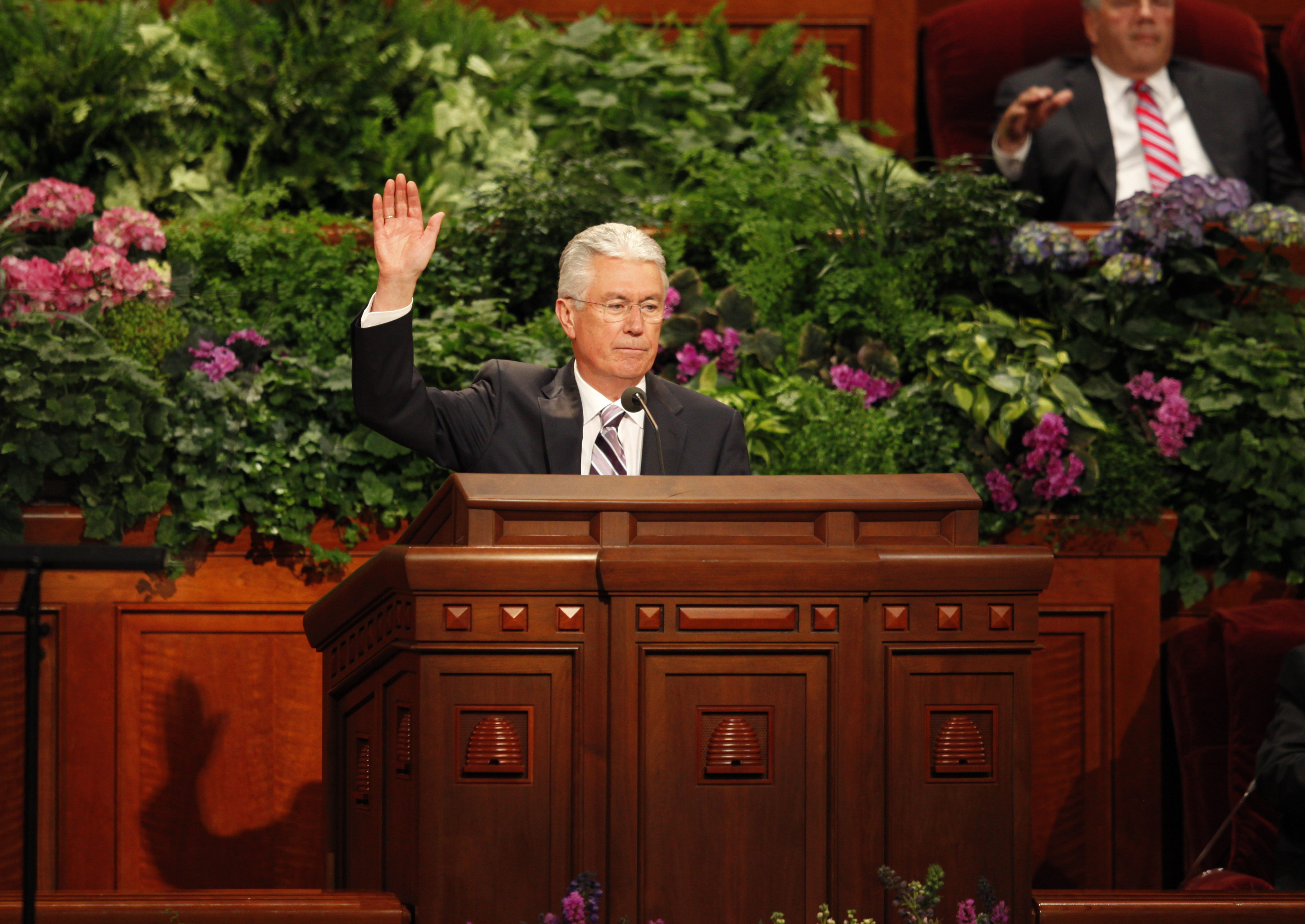 For more information on this topic, read “Sustaining the Prophets," by Russell M. Nelson, October 2014.

You can also review the Church's Young Women lesson on sustaining: "What does it mean to sustain my church leaders?"

“It is an important duty resting upon the Saints who … sustain the authorities of the Church, to do so not only by the lifting of the hand, the mere form, but in deed and in truth.”

Teachings of Presidents of the Church: Joseph F. Smith (1998), 211. This statement was made in 1898, when President Smith was Second Counselor in the First Presidency.

"No person is to be ordained to any office in this church, where there is a regularly organized branch of the same, without the vote of that church." (Doctrine & Covenants 20:65)

Start the lesson by asking your family to brainstorm other words that mean the same thing as sustain.

Talk to your family about the events that happened during the April 2015 Saturday afternoon session of conference, where several members vocally objected to the sustaining of the First Presidency and Quorum of the Twelve.

Ask how they felt knowing that some members did not sustain the prophet and Apostles. Ask them why they think someone would oppose sustaining a Church leader.

Explain the following, either by reading the quote or paraphrasing it in your own words:

We have an opportunity to sustain—support, help, pray for—each of these people in their callings. We indicate our willingness to do so by raising our right hands when their names are read to us in general conference, stake conference, ward or branch conference, or sacrament meeting. Raising our hands is a sign to us, to them, and to the Lord that we will sustain them.

Raising our hands to sustain someone is not like voting that person into office. The person has already been called by the Lord to serve in that calling by one who has the priesthood authority to extend such a calling. Our sustaining is a vote of confidence in the person, because we recognize that he or she has been called of God through priesthood leaders we sustain.

Ask your family to brainstorm ways they can support or help leaders of the Church both locally and on a larger scale. Ideas include: by our faith and prayers in their behalf, by following their counsel, by helping when they ask us, and by accepting callings extended to us.

President Eyring shared a beautiful story about one young man's example of sustaining his Church leaders:

Years ago an 18-year-old student showed me what it means to sustain the Lord’s servants. I am still blessed by his humble example.

He had just begun his first year in college. He was baptized less than a year before he left home to begin his studies at a large university. There I served as his bishop.

As the school year began, I had a brief interview with him in the bishop’s office. I remember little of that first conversation except that he spoke of his challenges in a new place, but I will never forget our second conversation.

He asked to see me in my office. I was surprised when he said, “Could we pray together, and may I be voice?” I was about to say that I had already prayed and expected that he had as well. Instead I agreed.

He began his prayer with a testimony that he knew the bishop was called of God. He asked God to tell me what he should do in a matter of great spiritual consequence. The young man told God he was sure the bishop already knew his needs and would be given the counsel he needed to hear.

As he spoke, the specific dangers he would face came to my mind. The counsel was simple but given in great clarity: pray always, obey the commandments, and have no fear.

That young man, one year in the Church, taught by example what God can do with a leader as he is sustained by the faith and prayers of those he is called to lead. That young man demonstrated for me the power of the law of common consent in the Church (see D&C 26:2).

I spoke recently with that young man who sustained his bishop years ago. I learned that the Lord and the people had sustained him in his call as a missionary, as a stake president, and as a father. He said as our conversation ended, “I still pray for you every day.”

("First Presidency Message: Called of God and Sustained by the People," Liahona, June 2012)

Give each family a piece of paper and a pen or pencil. Have them write a letter to a Church leader that they appreciate and admire. Make sure to mention what you are doing to help sustain them. Young children could draw pictures for those they look up to.

Send these letters to the person your children admire--even President Monson loves to get these heartfelt correspondences!