From monster truck driving to the Olympics and the NFL to the NBA, many famous athletes have found the gospel and discovered the fullness it brings to their lives. Here are just a few remarkable stories of athletes who have converted to the Church.

Looking at Thurl Bailey, you would probably assume he played some basketball. But few people would guess this 7-foot former NBA player is also a Latter-day Saint who published a CD of inspiring music and hymns.

Growing up in a high-crime neighborhood in Washington, D.C., Bailey’s childhood was strongly influenced by the Civil Rights movement. In fact, both of his parents attended Martin Luther King Jr.'s "I Have a Dream" speech at the Washington Monument. And though his family didn’t attend church regularly, Bailey says in an interview with Mormon Channel that his upbringing gave him a "very good spiritual foundation."

At 14 years old, Bailey saw Julius “Dr. J” Erving dominating the basketball court on TV. That was the moment Bailey knew he wanted to become a professional basketball player.

In the 1983 NBA draft, the Utah Jazz selected Bailey as the seventh pick, kicking off his 16-year career in professional basketball. That pick proved fateful in Bailey’s life, paving the way for his conversion to the Church. 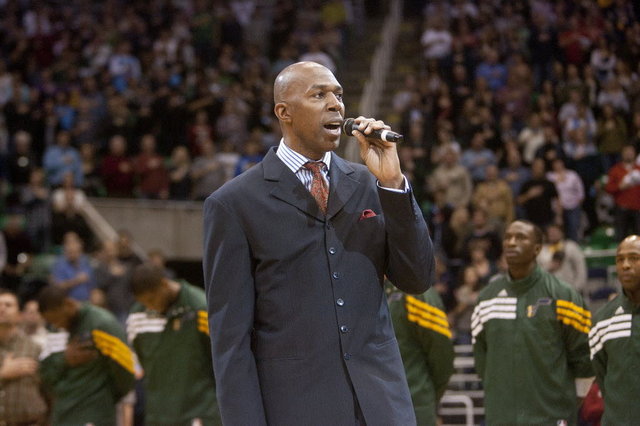 Image from The Oregonian

During his time playing with the Utah Jazz, Bailey married Sindi Southwick, a Latter-day Saint collegiate basketball player. Though he respected her beliefs, Bailey did not join the Church until nearly a decade later.

But, as an athlete in Utah, Bailey got regular exposure to Latter-day Saint culture and beliefs during those years, receiving “around 70 copies of the Book of Mormon” from well-meaning fans. "It was a totally different culture," he says in his interview with the MormonChannel. "People were very nice to me, not just because I played for the Jazz, but because they're truly genuine, kind, service-oriented people."

When Bailey decided to play for the Italian Basketball League (LBA) in 1995, he suddenly found himself in a whole new country and culture. "Times were tough," he says. "I was a captive audience, and my Father in Heaven knew it."

But it was those difficult moments that prompted Bailey to reach out to the missionaries in Italy. Over home-cooked, Southern-style meals that Bailey made for the missionaries himself, they shared great conversations and “ate very well.”

Bailey was baptized a member of the Church on December 31, 1995, just in time for the new year.

After his final year of professional basketball in 1999, Bailey turned his attention toward singing and acting.  "I was a singer before I was even a basketball player," he says. "I love music . . . I always felt like [it] was the language to my soul." Bailey now used that passion and language to bear his testimony through hymns and inspirational music that can reach those of all faiths.