When Jonah Lomu stepped onto the All Blacks New Zealand national rugby team in 1994, he was only 19 years old, making him the youngest player to ever have played for the team. It didn’t take long for Lomu to make a name for himself, becoming the first international rugby superstar. In 2007, Lomu was inducted into the International Rugby Hall of Fame and then the World Rugby Hall of Fame in 2011.

After playing professional rugby for 13 years, Lomu retired in 2007 and soon after began a new battle—one for his health. 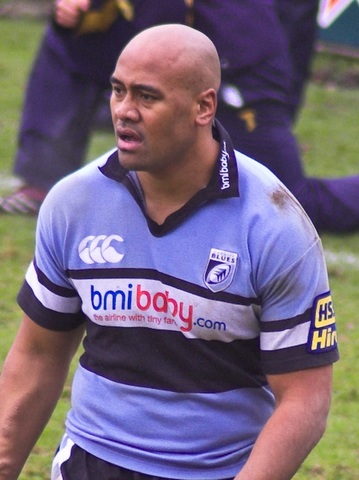 While battling nephrotic syndrome, a kidney disorder that causes your body to excrete too much protein, Lomu began to find comfort in Latter-day Saint doctrines. The missionaries that taught Lomu and his family were able to answer the questions he had been struggling with for years, leading Lomu and his wife, Nadene, to know the Church was where they were supposed to be.

Three years later, at the end of 2015, Lomu passed away at 40 years old, sending shock waves throughout the rugby community. Among those that sent their condolences to Lomu’s family were Queen Elizabeth, David Beckham, Morgan Freeman, and Elton John.

"Jonah, you were a freak on the field and a gentle, caring giant off it," former All Blacks coach John Hart said during a memorial service.

To highlight this fact about Lomu’s character, New Zealand Prime Minister John Key shared a story following Lomu and his team’s loss to France in the 1999 World Cup. "Despite his deep disappointment, Jonah remained on the field until he'd shaken the hand of every single French player," he said, according to ESPN. "More often than not, he was also the last player standing on the sideline signing autographs for young fans. That was Jonah."