With 51 PGA Tour wins (which places him seventh on the list of all-time winners), two U.S. Opens and a Masters, and 23 holes-in-one, no wonder Billy Casper made it into the World Golf Hall of Fame in 1978 and the PGA Hall of Fame in 1982. Oh, and did I mention he received two PGA Player of the Year awards, he played for the United States in eight Ryder Cup tournaments—where he logged 23.5 points, still the best for an American player—he won the Vardon Trophy for lowest scoring average five times—second only to Tiger Woods—and he became the second golfer ever to bank $1 million in tour earnings?

Billy Casper’s fame ventures into the realm of legend. So how did this golf champion become a Latter-day Saint? 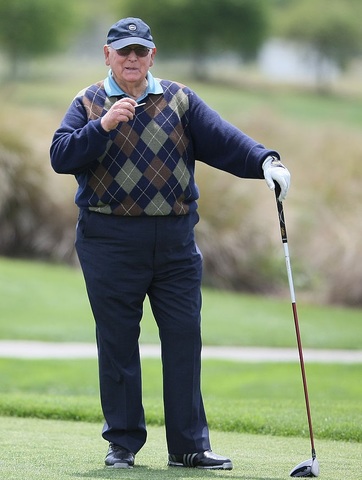 In his autobiography, The Big Three and Me, Casper explains that he came into contact with the Church frequently as he traveled to Utah for tournaments. Once, while on a fishing trip with his friend Don Collett in the Wasatch Mountains, he met Deseret News sports editor Hack Miller. A regular friendship quickly developed between Hack and Casper, and Casper’s wife, Shirley, regularly asked Hack questions about his faith.

While on a trip to the Hawaiian Open, the Caspers stopped by the Church-owned Polynesian Cultural Center and the temple. In his autobiography, Casper ironically writes, “We sat on the steps of the nearby Mormon temple and I asked my friend Wally Dill to take a picture of us, joking that it was as close as we'd ever get to being Mormons.”

But Casper’s run-ins with the "Mormons" were far from over. He continues:

“[W]herever we went it seemed we couldn't avoid something associated with the Church and its members. Soon after we returned to San Diego, Shirley was invited to a political function where George Romney (Mitt's father) . . . . The Romneys captivated Shirley with their poise, style and candor—and they were Mormon. Afterward she asked Cliff Wallace, a San Diego lawyer whom she knew to be some sort of local Mormon leader . . . if he might have the phone number for the full-time missionaries.

“You do not have to ask a Mormon such a thing twice.”

On mormon.org, Casper shared more of his conversion story:

“At the height of my career I joined The Church of Jesus Christ of Latter-day Saints. On New Year’s Day 1966 I was baptized along with my wife, Shirley, and two of our children who were of baptismal age. My membership in the church has factored into everything that has transpired in my life since. All 11 of our children—five are adopted—were baptized into the Church and it remains the center of our life. . . .

“It is the gospel's eternal perspective that gives my life security and meaning, and why I am so eager to share that message with others.”

As he traveled the world breaking records, Casper continued to share the gospel with others, adding, “I have spent my life trying to be true to that call, an at-large missionary to the world. The gospel is my most precious possession and wherever I go I look for opportunities to touch people's lives with its eternal message.”