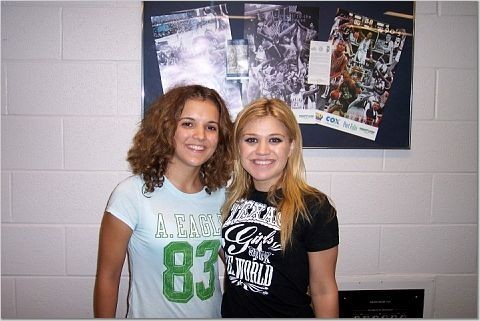 After receiving backstage passes to a Kelly Clarkson concert in March 2006, Morgan Jones was ecstatic as she began brainstorming what she could give her music idol during their meet and greet.

“What do you give someone who could literally buy anything they wanted?” she wondered.

Jones writes of her experience, "Then, I remembered an interview I had seen where Clarkson said that she really enjoyed reading books about different religions."

And that's when the perfect answer came to Jones: a Book of Mormon. "While I didn’t understand everything in the book, I knew that it had helped me in my life and I remember thinking that if it had helped me, maybe it could help Kelly, too," Jones says. "I felt like it was really the only thing I could offer her that she might not be able to get on her own. So I wrote my little teenage testimony on the inside cover and wrapped it in tissue paper."

After the concert, Jones waited in anticipation to meet Clarkson face to face. "I will love Kelly Clarkson forever because she could’ve reacted in a million different ways to being given a Book of Mormon, and in truth, she probably thought my gift was incredibly weird. But she couldn’t have been nicer, and maybe that’s why I still love her to this day," Jones remembers. "She immediately told me that one of her best friends growing up was a Latter-day Saint and then began to ask me questions about what I believed. She asked me about the book and about Latter-day Saint temples."

But one of the most touching parts of this exchange came after Jones met with Clarkson. Another fan she had met in line came up to Jones, tears streaming down her face. “I’m a Latter-day Saint,” she told Jones. “I never would’ve thought to give her [a Book of Mormon], but thank you.”

"I know there is always a reason that we feel prompted to share the things we hold dear," Jones writes. "Maybe it’s just for our own personal development, to help us feel in our hearts that we really do believe, or maybe it’s for the girl behind us in line."