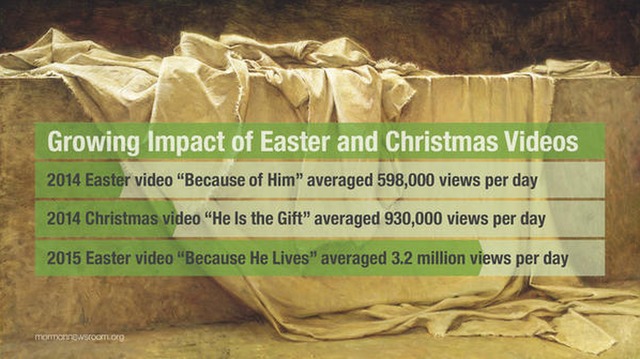 MR says: Remember the huge "Because He Lives" campaign from Easter? Find out just how many people the Church reached with this powerful message.

In 2014 the Church launched Christmas and Easter awareness campaigns to celebrate the life of Jesus Christ. Again in 2015, the Church launched the “Because He Lives” Easter campaign on Saturday, March 28. With the goal to reach millions through social media concerning the Savior, the Church used a YouTube video, visitors’ center displays, member and missionary tools and online paid promotion on hundreds of Internet sites. So how did the campaign perform?

“The Church’s latest initiative to spread hope through the teachings of Jesus Christ saw significant success this Easter,” said Greg Droubay, director of media for the Missionary Department of the Church. “Because He Lives” content was posted daily on Mormon.org social media pages (Facebook, Twitter and Google+) from Saturday, March 28, through Easter Sunday, April 5. The success of the campaign came in three ways.

The first success was the global reach in sharing a witness of Jesus Christ with the world through the “Because He Lives” Easter video (which focused on the possibilities for all mankind because of Jesus Christ’s resurrection from the dead), said Brother Droubay. On Easter Sunday, the initiative was showcased on the masthead of YouTube’s home page in nine countries (United States, Canada, Mexico, Argentina, Chile, Colombia, Brazil, Japan and Italy), reaching 329 million people that day alone.