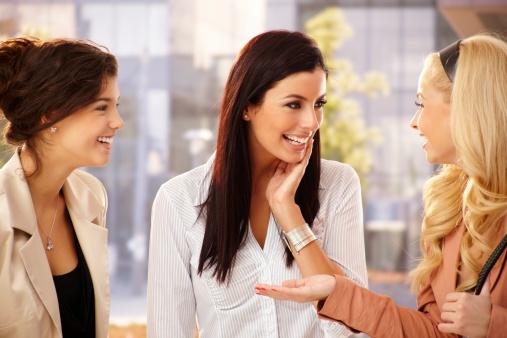 By definition, Relief Society is "one size fits all." Its membership is every Latter-day Saint woman over eighteen and mothers under eighteen. But differences among us abound: ages, cultures, occupational status, ethnicity, education, incomes, church involvement, social skills, political beliefs, hobbies and interests . . . and the list goes on! Creating an inclusive, nurturing environment for everyone can be a challenge. But solutions can be found when we apply President Gordon B. Hinckley's formula for involving new Church members: give each sister "a friend, a responsibility, and nurturing with 'the good word of God.'"

Renee Harding was new to Raleigh, North Carolina and feeling alone and sad, says her friend Michal Thompson. Then a Relief Society sister invited her to play tennis. "She was tempted to decline because of her lack of tennis skill," says Michal. "However, this sister insisted that neither skill nor tennis fashion applied!"

Renee started playing. Later, when Michal moved into her ward, Renee invited Michal to play, too. "She seeks me out to make sure I can come," says Michal. "I feel like she thinks I'm important."

The Relief Society president of a newly-organized ward used a similar idea to help sisters get acquainted. Her Enrichment committee organized hobby groups. Sisters signed themselves up and planned their own get-togethers. Some groups eventually fizzled out, but they served their purpose: to introduce like-minded sisters in casual settings.

Jennifer Smith, a divorced mother with two grown daughters, had been a member of the Church for less than two months when she was called to be a member of the Enrichment committee. "I was real excited about it. I need[ed] something to do other than come to sacrament on Sunday!" exclaims Jennifer. "I didn't know what the Enrichment committee even was. But [the Enrichment leader] said, 'I'm new to this job, too. We're going to learn this together.' She was very helpful."

Jennifer Smith's Enrichment leader knew that Relief Society terminology and traditions are often unfamiliar to new converts. She gave plenty of instructions, encouragement, and support. But she also gave Jennifer sufficient responsibility that Jennifer knew she was a valued part of a team.

When sisters serve together, cultural differences can lead to friction--or unique opportunities to celebrate multiple heritages. An African-American sister moved from the southern United States to a predominantly white northern-U.S. ward, where she joined the Enrichment committee. While planning a Thanksgiving dinner, the new sister offered to bring sweet potato pies. Another sister suggested pumpkin pies. A third sister, discerning that different traditions were being expressed, quickly suggested that dessert include both types of pies. The southern sister came with her delicious sweet potato pies--and brought several other sisters (who previously had not attended Relief Society functions) with their sweet-potato pies.

Carrie Boeman is a stay-at-home mother in Ohio who works in the Nursery on Sundays. Though the children can be engaging, she misses the spiritual camaraderie of Relief Society. She represents another category of women who may feel Relief Society doesn't "fit" her: sisters who do not attend class. These sisters need friends and responsibilities (though they often have plenty of responsibilities!), but they particularly need nurturing with the good word of God.

Recently Carrie expressed her feelings to her visiting teacher, who also serves in Primary. They issued each other a challenge: to read the Doctrine & Covenants every morning. Now a third of the way through the D&C, Carrie is feeling better spiritually--and has strengthened her friendship with her visiting teacher.

Visiting teachers are "nourishers" to sisters they teach. Additionally, Relief Society leaders can reach out to non-attending women with lesson summaries or a suggested gospel study program. Relief Society leaders might consult with other auxiliary leaders on how to provide sisters with spiritual nurturing without giving them "just one more thing to do."

Where appropriate, Relief Society leaders might encourage sisters to participate in the Church's "Pursuit of Excellence" program, which helps adult members make and keep important goals (including spiritual ones). While providing structure and encouragement, this program allows participants to have flexibility and privacy in their personal progress. (_The Pursuit of Excellence_ pamphlet may be ordered through Distribution Services.)

Any sister--young or old, long-time member or new convert--can get lost in the crowd. However, sisters may be especially vulnerable when experiencing change: from Young Women to Relief Society, from non-Latter-day Saint to new member, from one ward to another, from married to widowed or divorced, etc. These sisters really need friends, responsibilities, and spiritual nourishment!

One recently-divorced sister from Las Vegas, Nevada, has been impressed at how her ward handles transitioning sisters. "In our ward, the seventeen-year old Laurels come to Relief Society once a month to help them ease into Relief Society. [Also,] we had a military family move in two weeks ago. The wife said that they have lived in eighteen wards since they got married, and ours has the record for making them feel welcome!" This sister especially appreciated her ward's welcome nature after her marriage ended.

"They have been amazing to make a newly-divorced woman feel at home. They say hello in the hallways. They ask my opinion on things; they ask me to be involved in activities. My visiting teachers are amazing! They bring me gifts on my birthday and for graduation. They are just amazing people who care!"

Finally, even though Relief Society is "one size fits all," leaders' interactions with sisters can hardly be cookie-cutter. Through prayer, observation, and fellowship, Relief Society leaders can learn the individual approaches that will help each sister find--to her delight--that Relief Society is "just her size."

This article originally appeared in the January/February issue of LDS Living magazine.