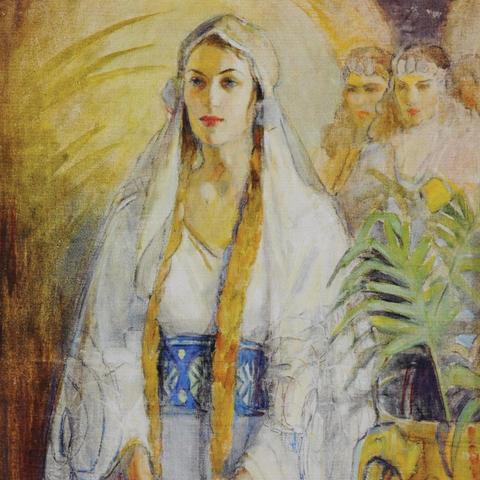 Finding Heavenly Mother in the Scriptures

"[Heavenly Mother] was inside these powerful and beloved scriptural heroines, and so She is inside of me. She is within all of us! When we reach deep into ourselves we will find Her there."

The following was written by Amber Richardson and shared on Q.Noor. You can view the whole article here.

The summer I turned 16, my ward traveled to Salt Lake City for our annual youth retreat. The pinnacle of the trip was a few hours spent inside the temple where we performed proxy baptisms together. The font—delicately wrought in white and gold—reminded me of the signature golden doorknobs outside of the temple. There weren't any beehives inside the baptistry though.

The font was elevated above the benches where we sat, and behind it there were two walkways that led into dressing rooms. Stephanie, who sat on the bench beside me, whispered, “She looks like an angel.” I looked up. JJ Woolstenhulme, one of our Young Women’s leaders, stood in her long white dress on a walkway. Comfortable with herself, she stood with an elongated, straight spine. She was a tall, slender woman, with a mane of rich brown curls.

JJ had always been exceptionally beautiful, but in that moment, there in that holy space, I noticed for the first time the love that was behind her eyes. It seemed to permeate her entire being. There was a royalty in that love, and a new and better kind of beauty.

Ten years later I found myself looking for the queenly maternal love I had seen in JJ Woolstenhulme that day. Until recently my search was fueled by desperation. Desperation because I thought I was looking for something external—the love of a Mother God. In pain I asked, “Where is my Mother? Why can’t I feel my Mother’s love?” And then one day I opened to Moroni 7:45:

To my still-lasting surprise, I began seeing Her in the scriptures. I saw Her in charity, in metaphors, in Her son, and particularly in Her daughters. God is Love, and so is She I’ve learned. I began to believe that She was inside of me, and inside of all of Her daughters; we were created in Her image after all! In this sense we are all queens, or at least queens-in-training.

As I’ve continued my search I recently began wondering about queens. There are so many in the scriptures. Was there something I could learn from scriptural she-monarchs about the Queen of Heaven?

“And charity suffereth long, and is kind”

But right from the get-go, I discovered something unfamiliar to me; Esther’s given name was Hadassah.

Hadassah was a Jew in exile who lived with her cousin and surrogate father, Mordecai, in Persia during the reign of King Ahasuerus. You probably know the story. The king banished his first wife, and then selected Esther to be his new queen from among the beautiful virgins he added to his harem following the divorce.

Racial tensions must have already been high considering that Mordecai instructed Esther not to “show her people or her kindred” once she entered the palace. It was probably at this time that Esther took her new name. Hadassah was a Jewish name, which means myrtle tree, but Esther was Persian. Esther means star.

Stars, of course, never stop shining through day or night. But to our eyes, they appear to only shine against a blackened sky. In that sense the darker it gets the more visible a star becomes.

There were many long, dark nights in Esther’s story. She became queen during the seventh year of Ahasuerus’ reign. . . .

I like thinking of Esther as the morning star, a celestial body so radiant it shines through the night right up through the first moments of dawn. The morning star signals the coming entrance of the sun, which is something Esther did for her people. Through her glorious kindness and selflessness, Esther set the stage for another redeemer who would follow her—the Savior of us all.

Read the rest of this story at qnoor.com