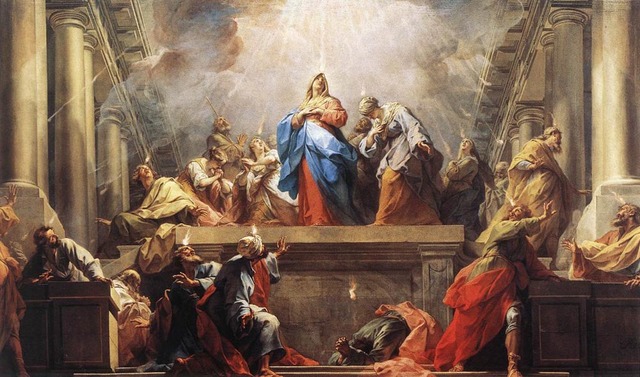 Fire and Speaking in Tongues: What We Can Learn About the Pentecost Festival in Acts

Acts 2 has frequently caught the attention of students of the New Testament, for it is here that the power of the Holy Ghost begins to show itself in the life of the nascent church. The apostles, whose number was newly completed with the addition of Matthias as the replacement for the fallen Judas (Acts 1:26), had gathered with other church members at the Jerusalem temple. They had probably assembled on the east side of the huge Court of the Gentiles under Solomon’s Porch, a favorite spot for church members to gather (Acts 3:11; 5:12). Precisely on “the day of Pentecost . . . they were all with one accord in one place” (Acts 2:1). At this moment, the Lord chose to seize the attention of everyone who would pay attention: “suddenly there came a sound from heaven as of a rushing mighty wind.” This was not the whole event because, next we read, “there appeared unto them cloven tongues of fire, and it sat upon each of [the Twelve].” As a capstone, “they were all filled with the Holy Ghost, and began to speak with other tongues” (Acts 2:2–4). In effect, the Lord had set the table.

Pentecost is the Israelite holiday that occurs 50 days after Passover and celebrates the first fruits of harvest, usually barley that by now stood in local fields “white already to harvest” (John 4:35). In Greek, the day is termed pentēkostē, signifying 50. In Hebrew, it is called shavuōt, meaning “weeks,” with the sense that this special day falls a week (seven) of weeks after Passover. All Israelite males were under obligation to come to this festival, if at all possible, as well as to Passover and the Feast of Tabernacles (Exodus 23:14–17; 34:18–24; Deuteronomy 16:16). Naturally, not all could make the three journeys each year. Many had to choose which celebration they would attend, if any, as did Paul when he traveled to Jerusalem for the last time, leaving from Greece to attend Pentecost (Acts 20:16).

For this one-day event, Jewish people gathered from all over the known world, basically from southern Iraq to western Spain. This is exactly what we see in the foreign languages of the Jews whom Luke lists as guests at the temple that day (Acts 2:9–11). Importantly, “proselytes” joined them (Acts 2:10), that is Gentiles who were attracted to the synagogue as a worthwhile institution of worship and moral instruction. It was such non-Jews whom Paul regularly gathered to himself as a missionary.

Fire and the Holy Ghost

The tongues of fire that had come to rest on the Twelve attracted much of the huge, gathered crowd to the part of the temple grounds where the believers had gathered, as did the quick-spreading news of the event—“when this was noised abroad” (Acts 2:6). What was just as impressive was the fact that “Galilaeans” (2:7), evidently known by their accents (Matthew 26:73), were speaking in the foreign tongues of the guests. With the multitude suitably impressed and even confused—“What meaneth this?” (Acts 2:12)—Peter stepped forward and, in a loud voice, addressed the massive audience. Quoting the words of the Prophet Joel about coming spiritual manifestations, he quickly introduced his hearers to “Jesus of Nazareth, a man approved of God among you” (2:22). It was He, Peter affirmed, “whom God hath made . . . both Lord and Christ” (2:36). Moreover, as Peter had reminded his audience just moments earlier, what they had just witnessed was an experience with the Holy Ghost that Christ had “shed forth” and was an experience “which ye now see and hear” (2:33). In a word, they were witnesses to a divine manifestation tied to Jesus Christ. At this, “they were pricked in their heart, and said unto Peter and . . . the apostles, Men and brethren, what shall we do?” (2:37). The Lord was about to feed the multitude from His table.

Peter and his associates were ready for the question “what shall we do?” The needed actions were simple: “Repent, and be baptized every one of you in the name of Jesus Christ for the remission of sins,” he intoned, “and ye shall receive the gift of the Holy Ghost” (Acts 2:38). The result? Those who then “gladly received his word were baptized: and that same day there were added unto them about three thousand souls” (2:41). Most of these people, of course, were from out of town. Perhaps a couple hundred resided in Jerusalem and became the foundation of the church in the capital city. We hear of them later among “the multitude of them that believed” (4:31), among “the widows” of “the Grecians” and “the Hebrews” (6:1), among the “great company of the priests [who] were obedient to the faith” (6:7), among those gathered in “the house of Mary” (12:12), and among “the sect of the Pharisees that believed” (15:5).

A question presses for an answer. Why did the authorities not intervene in events that were occurring under their noses, within the temple grounds? The response is that they were totally distracted by all that was happening near the sanctuary, far from Solomon’s Porch. Visitors by the thousands had come to pay their temple tax and to offer sacrifices. The business of exchanging coins and selling animals all took place without the direct involvement of temple officials. But they certainly played a supervisory role, even if with a light touch. What is more, the heavy duty of the priests during this one-day festival took place especially in the large courtyard that surrounded the sanctuary where thousands of animals were slain, properly bled, skillfully hung and flayed, and then burned on the great altar that stood next to where all this slaughtering took place. In a word, authorities were under tremendous pressure to meet the needs of the gathered throng of worshipers, most all of whom needed to offer at least one sacrifice on that day.

We now come to another important question. What happened to all those worshipers who came from out of town? Answer: they all went home. But thousands of them carried in their minds the memories of that day near Solomon’s Porch and, more significantly, in their hearts the Holy Ghost. It was as if sparks of divine light were scattered across the Mediterranean Sea and throughout Egypt and the eastern deserts and the mountains and shores of Asia Minor to the north. These believing people would be in place when Paul and other missionaries rolled into their cities and towns and hamlets, providing them with warm, receptive hearts. The Lord had set His table on an important day in the lives of thousands of the Jewish faithful, had fed them from His spiritual bounty, and then sent them home filled with His light.

Lead image a depiction of Pentecost by Jean II Restout, 1732.