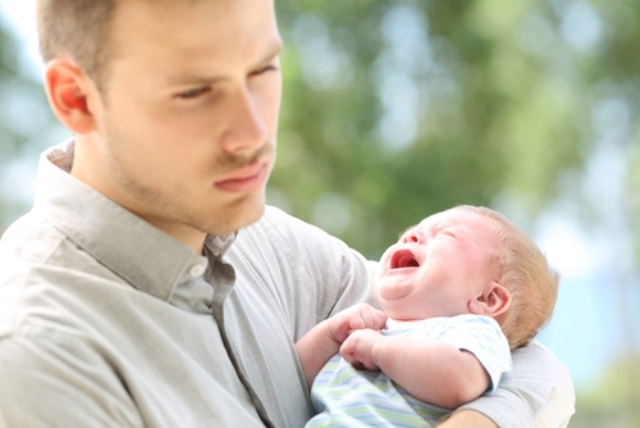 When a couple has a new baby, we instinctively ask the new mother how she is holding up, but how often do we think to ask the new dad how he is coping with the stress of sudden fatherhood?

A new study published in the Journal of Family Issues offers an in-depth look at how new fathers experience postpartum depression. The study explores the issues those suffering from paternal postpartum depression face and how they can overcome the lack of awareness regarding this little-known diagnosis.

The study’s lead researcher, Brandon Eddy, is a UNLV professor in Couple and Family Therapy and a member of The Church of Jesus Christ of Latter-day Saints.

Eddy first became interested in postpartum depression while in graduate school studying to become a marriage and family therapist. His wife suffered from PPD after the birth of their first child. Eddy says the couple was blindsided by the diagnosis and knew very little about PPD.  He quickly began to research the topic and soon discovered that while fathers, too, could suffer from the effects of PPD, very little research had been done about men and their experiences with it.

In the study, the researchers write that paternal PPD is "an underscreened, underdiagnosed, and undertreated condition which creates considerable complications in families. Postpartum depression not only harms those experiencing it, but it also affects relationships with one's partner and children."

Many new mothers experience the “baby blues” after a child is born—a period that typically begins within the first few days of pregnancy and may include mood swings, anxiety, crying, and trouble sleeping. This may last up to two weeks.

However, postpartum depression is much more than just the typical “baby blues"; it is characterized as a more severe, lasting form of depression. Postpartum depression does not have a single cause but likely results from a combination of physical and emotional factors.

Being aware of the risk factors for postpartum depression is important, says Eddy.  Some factors that put individuals at risk for PPD include relationship struggles, financial difficulties, mixed feelings about the pregnancy, family history of depression, and inadequate social support.

Between 5 and 10 percent of new fathers in the United States suffer from postpartum depression, according to data from the U.S. Centers for Disease Control and Prevention. One study shows that the risk goes up to a whopping 24 to 50 percent for men whose partners also suffer from PPD.

For their study, Eddy and other researchers from Texas Tech, UNLV, and BYU searched chat rooms, blogs, and forums for first-hand accounts from new dads detailing their experience with postpartum depression.

They discovered six underlying themes in their research.

Where New Fathers Can Find Support

Postpartum depression can be especially daunting for new fathers because so much of the information available is aimed at helping women deal with its effects.

So where can new dads turn for support?

Ideally, according to Eddy, men would turn to their spouse, another family member, or even a close friend for that support.

“Chances are that you know somebody who has suffered from PPD, but you just don’t know it,” he said. “People often don’t share, though, because they feel a great sense of shame about the feelings they are experiencing. Also, men in society are conditioned to be tough and suppress certain feelings or emotions, so they do.”

Trying to fill the societal expectation to be “strong” or “masculine” can be detrimental for mental health, says Eddy. Suppressing those feelings can often lead to greater struggles and difficulties, both personally and in relationships.

Eddy says it is important for couples to remain strong and connected during pregnancy and to be aware of potential struggles their spouse is going through.

The Spiritual Effects of Paternal PPD

“Suffering from PPD, anxiety, etc. does not mean you have done anything wrong,” stresses Eddy. “Oftentimes in [our Latter-day Saint] culture we associate pain, suffering, or struggles with sin.  Sometimes we think that if we are living a good enough life that struggles like PPD or anxiety won’t afflict us.  The truth is PPD can impact anyone no matter how good a life they are living.”

Eddy reminds those suffering from postpartum depression to follow the advice Elder Jeffrey R. Holland gave when he shared about his own struggles with depression. In an October 2013 address, Elder Holland counseled, “If you had appendicitis, God would expect you to seek a priesthood blessing and get the best medical care available. So too with emotional disorders.”

Eddy also wants new fathers to remember that it is okay to ask for help.

“There is so much pressure associated with trying to be a good husband and father, and to be a good provider and to enthusiastically fulfill your church calling,” notes Eddy. “Sometimes we cannot excel in all of those responsibilities at the same time. As King Mosiah said, ‘it is not requisite that a man should run faster than he has strength.’ It is important that we learn to recognize when we need help and then have the humility to ask for it.  If we ask for help, the Lord will provide it.”

When mental and emotional challenges confront us, it is crucial to remember that it is not a character defect or something you brought upon yourself.  It doesn’t mean you are “less righteous”—it simply means that a part of your body, your brain, needs some help to function at its very best.

How You Can Help New Fathers

Mothers and fathers have many of the same needs after a child is born, says Eddy.

“Mothers might have more physical needs during the postpartum time period, but both parents are often stressed, sleep deprived, and exhausted during this time,” he said. “Both parents need someone to talk to and need time to relax. Having a strong support system and taking care of yourself are two protective factors against PPD.”

Eddy recommends that when you are interacting with a couple who just had a baby, ask how each member of the family is doing.

He said, “I have had multiple fathers discuss how after the baby is born everyone will ask, ‘How is Mom doing?’ or ‘How is Baby doing?’ but people rarely ask, ‘How is Dad doing?’”

Another opportunity to help others is at family gatherings or ward events. Oftentimes parents are isolated caring for their baby while everyone else is socializing. Eddy suggests simple gestures can be helpful and provide relief. Things like offering to help hold the baby so that the parent can get a breather and have a chance to socialize with others can make an impact for a struggling new parent.

If you are struggling, do not try and overcome it by yourself, Eddy advises. Ask for help. Talk to someone. In addition to their spouse, new fathers can also turn to Church leaders, therapists, and other support groups.