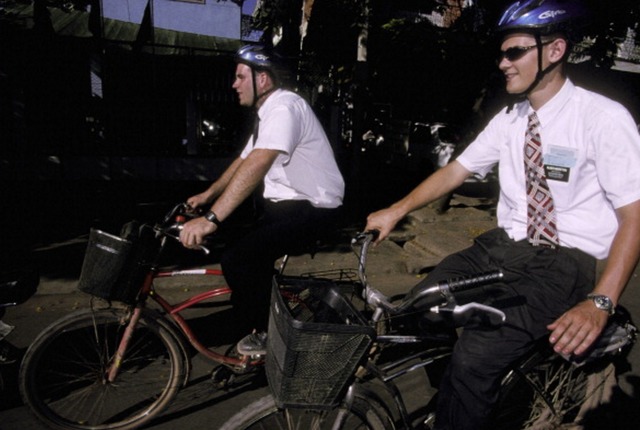 A recent article on a Christian blog, crosswalk.com, gives advice to readers about how to deal with their Mormon neighbors, more specifically, the missionaries.

The author, Ryan Duncan, relates a story many not of our faith as well as many LDS missionaries can relate to:

I can still remember the day I first saw two well-dressed young men making their way up our cul-de-sac. To my 10-year-old eyes they appeared nice enough; they wore white collared shirts, black pants, and respectable neckties like the men at church. Still, when I told my mother who was coming, she gave a heavy sigh and proceeded to turn our house into Fort Knox.

I was given specific instructions not to answer the door and not to leave the house until both men had left the neighborhood. By now, you’ve probably discerned the identity of our mysterious visitors: they were Mormons, and this wouldn’t be the last time they came knocking.

Duncan goes on to describe a number of methods people use to "deal" with Mormon missionaries—everything from ignoring them, arguing with them, shunning them, and even being hospitable to them.

But then the article goes on to describe simplified and incorrect (though common) assumptions about Latter-day Saints that miss the whole point of Mormonism altogether. Duncan quotes 2 John 1:10-11, saying these verses are "meant to remind believers that Mormons place their faith in something other than Jesus. As such, they shouldn’t be received as reliable teachers or spiritual mentors."

In response to this article, a recent LDS convert, Giles Andrew Naud, offered the perfect response, correcting this misinformation while still remaining positive:

I have just join[ed] the Mormon church. I am 68 and [have] been involved in many religion[s]. I even once was a priest in the old Catholic church (not Roman Catholic ). I found [Mormons] to be caring for people in the real sense and not for the money and they preach about Jesus Christ a lot in my conversation with them. I always find them positive and with the love of Jesus with them. All those years I was afraid of them for nothing. It was only caused by the media giving people wrong info . . . never trust the media. Just trust in Jesus.

Another LDS commenter, Jeremiah R. Jones, pointed out that the full name of the Church, The Church of Jesus Christ of Latter-day Saints, was never mentioned in the article and might "do a lot to dispell someone's anxiety that a Mormon is trying to lead you away from Christ."

This debate reminds me of the words of  Dr. Stephen H. Webb, a Catholic professor who, when most of the world refused to view Mormons as Christians, publicly defended them, saying, "Mormons are more Christian than many mainstream Christians who do not take seriously the astounding claim that Jesus is the Son of God."

While the world continues to often misunderstand the LDS Church, I'm grateful for members who are brave enough to share their beliefs in a sincere way as well as nonmembers who are willing to help defend our faith. As members of The Church of Jesus Christ of Latter-day Saints, our entire doctrine centers around our Savior, Jesus Christ, and it's important for us to share that message whenever we can.