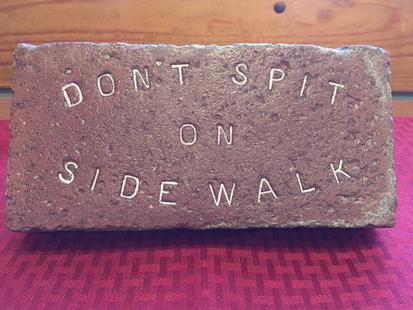 In 1973, Kim Roberts was serving as a full-time missionary for The Church of Jesus Christ of Latter-day Saints in the Texas North Mission. Because the mission had enjoyed an influx of newer missionaries, then-Elder Roberts and his companion were asked to travel the mission and provide some hands-on training. Six months before the end of Roberts' mission, their travels took them to Denison, a small city 75 miles north of Dallas.

Roberts remembers one afternoon, while working alongside the missionaries assigned to Denison, noticing something unusual about the red bricks in the sidewalk near the house they temporarily called home. Some of the standard-sized bricks were stamped with the words, “Don’t Spit on Sidewalk.”

Roberts eyed a few unstamped bricks loose on the edge of the road and decided it was time to take a souvenir. He and his companion carefully pried a couple of bricks loose from the sidewalk and replaced them with plain ones. He later learned that the unusual bricks had been laid at the turn of the century as a reminder to citizens of the tumbleweed town that they could reduce the spread of tuberculosis by not spitting on the ground.