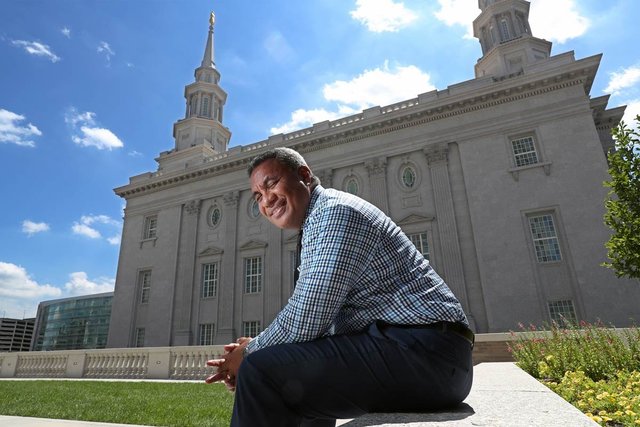 Former NFL Player, News Anchor Shares Why He's Been at the New LDS Temple in Philadelphia

Former Philadelphia Eagle and current news anchor Vai Sikahema surprised many as they toured the new LDS temple in Philadelphia. Most didn't expect a local celebrity to help them through their tours, but Sikahema saw the experience as a great privilege and honor.

ThePhiladelphia Inquirer recently highlighted Sikahema, his LDS faith, and his story, explaining that the first time Sikahema and his parents attended a temple, it took them four days to reach the Hamilton New Zealand Temple from their home in Tonga. Even then, the family only had enough money for one-way tickets, so Sikahema's father had to work for three months as a sheep shearer to earn money for the return trip.

But Sikahema noted that the faith of the Saints in Tonga is strong—Tonga has the highest number of Latter-day Saints per capita in the world.

And, as a father of four who currently serves as a stake president, Sikahema has continued that tradition of service and devotion—something which helped him through his football career.

"I was restrained from doing things that perhaps, to others, seemed fun or some may even consider entitlements to professional athletes: being with women, spending money like a drunken sailor," Sikahema told the Philadelphia Inquirer. "I never had that. I realized the enormity of my circumstances and how blessed I was, so I wasn't going to squander that."

Now, having taken people through the temple on guided tours, Sikahema and his wife have already developed a special relationship with the new temple in Philadelphia.

To read more, go to the Philadelphia Inquirer.

Lead image from the Philadelphia Inquirer.