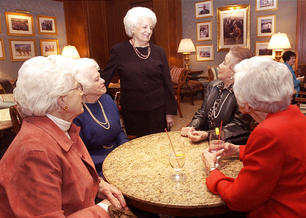 SALT LAKE CITY — Former LDS Relief Society General President Barbara Bradshaw Smith died Monday after a life in which she met with kings and queens and talked to U.S. presidents and was a strong voice on women's issues.

Family members described Sister Smith, 88, who served as the 10th Relief Society general president for The Church of Jesus Christ of Latter-day Saints from October 1974 to April 1984, as a beacon of light who stayed involved in community and LDS Church activities even after becoming ill with pulmonary fibrosis in recent years.

She passed away Monday at 10:05 p.m., surrounded by her seven children and their loving families.

"If anybody was ready to go, she was," her brother Thomas R. Bradshaw told the Deseret News on Monday night. "She had done so much for so many people and traveled the world, as well."