Operation Underground Railroad (OUR) founder Tim Ballard was more than a little surprised when NFL Super Bowl champ and former Oakland Raiders safety Burgess Owens asked if he could share the story of his great-great-grandfather, Silas Burgess.

► You'll also like: How a Black NFL Player Converted to the Church Just 4 Years After the Priesthood Ban Ended

But as the two sat in Ballard's office a few days later, Ballard understood why Owens felt impressed to share the story of his ancestor. Through Owens, Ballard learned that Silas Burgess had experienced the cruelties of slavery as a young boy when he and his mother were kidnapped in Africa and sold to a plantation owner in South Carolina.

After Burgess' mother, who was repeatedly raped and beaten by the plantation owner, escaped, Burgess decided he would also seek freedom. Using the Underground Railroad, the inspiration for Ballard's OUR, Burgess was able to make it to Mexico, where he dedicated his life to serving others.

Owens also shared how the collaboration of people from different races and nationalities helped make it possible for Burgess to escape a life of slavery, something Ballard also tries to accomplish through OUR, which saves children all over the world from human trafficking.

► You'll also like: Watch: Ex-CIA Agent Shares the Scripture That Saved His Life from Human Traffickers

DON'T MISS IT! Tim Ballard and special guest Burgess Owens will be answering your questions LIVE on February 18. Tim Ballard, the author of our February book club pick "Slave Stealers," was limited by his job with the Department of Homeland Security. He left to establish Operation Underground Railroad (@ourrescue). This foundation infiltrates black markets in human trafficking, liberates victims, and provides a comprehensive aftercare process involving justice and rehabilitation for survivors. Read more about his story, who inspires him, and the importance of his mission in "Slave Stealers" with us this month. Burgess Owens, former starting safety for the Super Bowl champion Oakland Raiders, is featured in chapter 10 of "Slave Stealers." He took a special interest in Tim Ballard and Operation Underground Railroad because of his family history. Burgess' great-great-grandfather, Silas Owens, was forced into the slave trade and liberated by means of the Underground Railroad. Read about the inspiring legacy Silas began for his family and how his story touched Tim Ballard by reading with us this month!

"And this brings me to why I traveled the distance to meet you the other night,” Burgess [Owens] said, according to Ballard's new book, Slave Stealers. “I want to say thank you! Thank you for resurrecting the memory of the Underground Railroad. There is power for good in that name and memory. That power for good has traveled for generations and landed on me. It has touched my heart and it has touched my soul.”

Now, Ballard and Owens will meet again to share their mutual passion for liberating survivors of modern-day human trafficking.

Join the LDS Living Book Club on Instagram on Monday, February 18 at 11 a.m. MST for a live Q&A with Ballard and Owens. 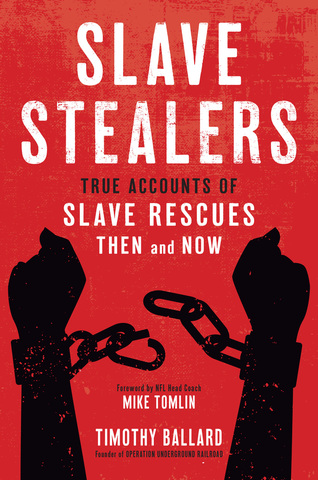 Slave Stealers alternates these two riveting stories, weaving them together to expose the persistent evil of trafficking and sexual exploitation that has existed for centuries—and inspiring us to find a way to end it. Filled with heartbreaks and triumphs, miracles and disappointments, hair-raising escapes and daring rescues, this gripping book provides insight into this terrible evil and the good that can be done when caring people step up and stand in the light.