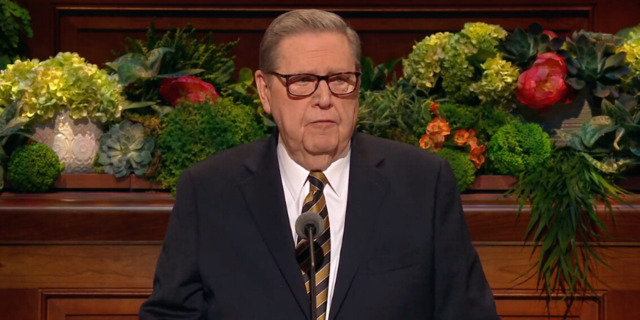 Found in the Footnotes: The Irony of Cain’s Fratricide, Explained by Elder Holland

Editor's note: Our weekly Friday column, “Found in the Footnotes,” explores some of the footnotes from remarks given by General Authorities and General Officers of The Church of Jesus Christ of Latter-day Saints.

There’s no way of really knowing this, but I’m pretty sure the first time I heard the word “fratricide” was when Elder Jeffrey R. Holland gave his address “Behold the Lamb of God.” However, after I heard and as I’ve since studied his address, this new vocabulary word is just one of many things that has stood out to me.

Elder Holland of the Quorum of the Twelve Apostles explained that when Adam and Eve left the Garden of Eden, they knew they were to offer sacrifices. “We are not certain just how much these two were allowed to remember of the instruction they received while still in the Garden, but they did remember they were to regularly offer for a sacrifice unto God a pure, unblemished lamb, the first male born of their flock,” he said.

We also know that Adam and Eve did not know why they offered sacrifices at first. In the Infinite Atonement, Elder Tad R. Callister explains, “Day after day Adam offered sacrifices without knowing why, without fully understanding the plan of salvation. After ‘many days’ (Moses 5:6), meaning after Adam and Eve had begotten sons and daughters and they in turn had begotten ‘sons and daughters’ (Moses 5:3) an angel came and offered these words of consummate comfort: ‘As thou hast fallen thou mayest be redeemed, and all mankind, even as many will.’”

The angel then explained the way to redemption, and that way was through the Savior who was to come. “This sacrifice was a type, a prefiguration of the offering that would be made in their behalf by the Savior of the world who was to come,” according to Elder Holland. “By offering their own little symbolic lambs in mortality, Adam and his posterity were expressing their understanding of and their dependence upon the atoning sacrifice of Jesus the Anointed One.”

The new handbook points to Adam and Eve as an example for all couples: “They worked, prayed, and worshipped together (see Moses 5:1, 4). They taught their children the gospel and mourned together over their trials (see Moses 5:12, 27). They were united with each other and with God.”

Certainly one of the trials they mourned over was when Cain killed Abel. Elder Holland explains how Cain's killing of Abel was an example of the declining moral resolve in Old Testament times: “Unfortunately, as a symbol of genuine repentance and faithful living, this ritualistic offering of unblemished little lambs didn’t work very well, as so much of the Old Testament reveals. The moral resolve that should have accompanied those sacrifices sometimes didn’t last long enough for the blood to dry upon the stones. In any case, it didn’t last long enough to preclude fratricide, with Cain killing his brother Abel in the first generation.”

Then Elder Holland includes this information in footnote seven:

Ironically, Cain’s slaying of Abel, an act ultimately directed by Satan, may have been linked to Cain’s earlier anger over his sacrificial offering being rejected by the Lord while Abel’s was accepted.

“By faith in this atonement or plan of redemption, Abel offered to God a sacrifice that was accepted, which was the firstlings of the flock. Cain offered of the fruit of the ground, and was not accepted. . . . [His sacrifice was to have included] the shedding of blood” (Teachings of Presidents of the Church: Joseph Smith [2007], 48; see also 107–8).

So now in our day, what is our sacrifice that is accepted by the Lord? Elder Holland shares this in his book Witness for His Names: “When Christ actually did come and offer up that ultimate sacrifice, the symbolic offering required of the generations that would follow was changed to that of a broken heart and a contrite spirit (see 3 Nephi 9:18–22).”

One of my favorite quotes from Elder Neal A. Maxwell shows that sacrifice was never about an animal, but rather sacrifice is about the heart's intent:

“So it is that real, personal sacrifice never was placing an animal on the altar. Instead, it is a willingness to put the animal in us upon the altar and letting it be consumed! Such is the ‘sacrifice unto the Lord . . . of a broken heart and a contrite spirit,’ (Doctrine and Covenants 59:8), a prerequisite to taking up the cross, while giving ‘away all [our] sins’ in order to ‘know God’ (Alma 22:18) for the denial of self precedes the full acceptance of Him.”

Full acceptance of the Savior allows us to fully receive His blessings—and that is worth every sacrifice.

In this beautiful book, Elder Holland shares his notes and insights about the many names of Christ he has studied in his 25+ years as an Apostle. He promises that "as we study these titles to learn more about who He was and is, we will find ourselves learning more about who we are and what we may become." In doing so, we will gain a greater understanding of our covenants and how each of us can more fully bear witness of Christ's holy name. Available now at Deseret Book stores and at deseretbook.com.