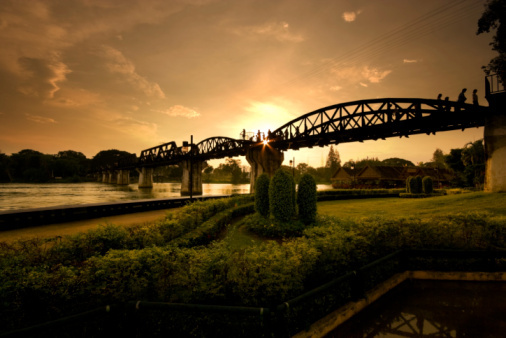 Four Places You Must See: Thailand

Bridge on the River Kwai
This bridge is infamous for being the place where thousands of Allied POWs worked to build the Burma-Siam Railway for the Japanese army. Known as the Death Railway, it received its name because records show that nearly 16,000 POWs died during its construction, along with more than 90,000 native Asian laborers. Near the bridge is a WWII Museum that displays artifacts and histories of the soldiers. Further down the road is the War Cemetery, where 7,000 POW soldiers, mostly British, Australian, and Dutch, were laid to rest. Although this is a different aspect of Thailand’s history, the experience of the museum and cemetery is truly hallowing.

Ayutthaya Historical Park
Wander your way through dozens of old palaces, temples, and ruins in one of Thailand’s largest historic sites. Ayutthaya was the Siamese capital for over 400 years until it was pillaged by the Burmese in the 18th century. This is an ideal spot for some of your best vacation photos. Rent a bike so you don’t have to walk everywhere. Near to the park are a number of museums and villages; you will also find traditional markets and shops if you want to pick up a sword, Thai silk, or elephant-related souvenirs.

Chatuchak Weekend Market
If you are in Bangkok over the weekend, you can visit Chatuchak, credited as the world’s largest flea market. With upwards of 5,000 stalls and over 35 acres of merchandise, you can spend a whole day there and not see everything. Shop for souvenirs, electronics, art, clothing, and anything else you can pack in your suitcase. To get there, take the Skytrain to the Mo Chit station and follow the sidewalk signs. On weekdays, you can head to the Pratu Naam and Beyoke markets.

Chiang Mai Elephant Camps
In the Land of a Million Elephants, it’s only natural that you would arrange a trip to an elephant farm. Watch elephants bathe in the river, play soccer, and paint pictures. (Yes, they actually paint.) The two elephant camps are Chiang Dao and Maesa. Each has an elephant show and special elephant training packages where you learn to train an elephant. You can also arrange a jungle trek on an elephant. On these trips, which range in duration from a half-hour to several days, you will ride through jungle and river to visit waterfalls, historic sites, and breathtaking vistas.