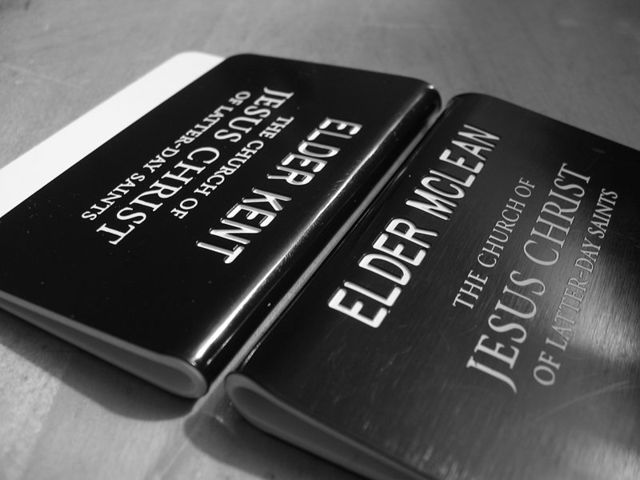 From ABC to MTC

Missionaries adhere to strict standards and a rigorous daily routine, both in the MTC and in the field, which can be a shock to many young people. But by helping your children develop good personal habits, effective social skills, and a strong testimony, you can arm them with the tools they need to adjust quickly and easily to missionary life - not to mention professional and family life later on. To help you in your quest, here is some sound advice from former mission presidents, returned missionaries, and a mother of five RMs.

Life in the mission field is busy, beginning at 6:30 A.M. and continuing until 10:30 P.M. The sooner a young man or woman becomes accustomed to rising and retiring early, the better off he or she will be.

"If young people have been living a lifestyle where nights are days and days are nights, suddenly to turn that around in the MTC is pretty traumatic," says John Livingstone, a former mission president and Mission Prep teacher at BYU.

Encourage your children to maintain normal sleeping habits and avoid staying up or sleeping in late on a regular basis. These habits are most easily established during childhood and reinforced continually (though circumstances, especially during high school, may occasionally justify a deviation).

"My mission president used to say, 'You don't have to move mountains, just your bed sheets,'" recalls James Brown, who served in the Arizona Tempe Mission. "If you're able to get out of bed on time, that's the first step - the Lord can take care of the rest."

Similarly, personal care is an absolute must for missionaries. Teach your children about hygiene and grooming early, both through instruction and example. And don't forget to emphasize the importance of regular exercise.

"I think the most important thing parents can do is to actually model good nutrition and exercise," Livingstone says. "If parents are active, that sure encourages kids to be active. . . . It's much easier for parents to motivate children to do things when the parents themselves are doing it. The couch-potato dad has a hard time telling his boy 'You need to exercise!'"

A missionary's hopes may be dashed when he discovers that frozen corn dogs aren't readily available in the Philippines, so teaching future missionaries how to cook a few basic meals can be a lifesaver. In fact, in most missions, missionaries are expected to cook, sew, clean, do laundry, and iron for themselves. Unfortunately, these are not tasks most young people try to learn, so it is up to parents to find ways to teach those skills without making them seem tedious.

"My mom was really smart," Livingstone recalls. "She would not let me iron, and it kind of became a big privilege. If parents encourage children wisely, they actually can have children looking forward to some things. Some mothers will organize their wash and come up with very inventive ways of separating colors and things like that." As children sense a parent's zeal for housework, they will begin to look forward to and even enjoy helping complete the task at hand.

"By the time [my kids] were in junior high, they were doing their own wash," recalls Jamie Miller, mother of four sons and one daughter - all returned missionaries. "They did all their own shopping, too."

According to James Brown, in addition to knowing how to cook and do laundry, knowing how to do basic clothing repairs and alterations is a must for missionaries in the field. "[Help children] learn how to hem pants or fix a rip in the crotch or sew on a button," he advises. "It's really useful because it happens more than you think."

"The best missionaries come to the mission prepared to work," says Mike Lindstrom, former president of the Peru Lima East mission. "They have learned to dedicate themselves to accomplishing the task at hand."

In teaching personal habits, Lindstrom believes parents' greatest tool is their own conduct.

"Parents teach best by example," he says. "Young missionaries often speak of the example set by their mothers and fathers. A parent is wise to offer encouragement and praise to children as they learn to develop Christlike characteristics. . . . If children observe parents who are dedicated workers, they will tend to do the same. A parent who serves with all their heart in church callings will set a pattern that children will follow. A young person who works and saves to help pay for his or her mission learns about work as well as sacrifice."

Start reinforcing a work ethic when children are young. Livingstone recommends assigning specific, age-appropriate jobs for them to do on a daily or weekly basis. Jamie Miller agrees.

"My children were required to do a fair amount of housework and yard work," she recalls. "And when they were fifteen or sixteen, they all got jobs, whether at an ice cream shop or on the school maintenance crew, and they worked throughout high school and college."

To help instill a strong work ethic, one of the best things parents can do is create a culture where work is expected. And it is the observation of David Ensign-Lewis, a former MTC teacher, that young men and women who work and save to pay for all or part of their own missions tend to demonstrate greater discipline and work harder than other missionaries.

Hard work is essential not only in the mission field but in every aspect of life. However, without proper planning and time management skills, the hardest worker will still be ineffective.

School and other activities can help children learn to plan and manage their time wisely. In this respect, parents should encourage their children to pursue activities that interest them, since this can help them develop the ability to prioritize and successfully handle a demanding schedule.

Planning and prioritizing are skills that parents can begin teaching at an early age. By including children in family planning sessions, children become familiar with both the process and purpose of planning. It is especially helpful if parents take time to explain to their children why they make specific scheduling decisions - they cannot do everything they want to do, so it is important to prioritize the most important activities.

Livingstone says, "If parents can help their children learn calendaring, having their own children keep track of their commitments, their appointments - if a child is carrying even just a small calendar - they learn to organize their time and show up on time, which is really a big deal in the mission field."

As part of the process, Livingstone suggests allowing children to make their own decisions by giving them two or three choices. By doing so, Livingstone explains, children become accustomed to reasoning and making decisions, skills that will help them prioritize and organize their time much more effectively later on.

For many young men and women, the mission field is the first place that they are required to really converse with strangers. That can be a daunting prospect.

Miller says that because her family hosted parties on a regular basis, her children became comfortable with meeting new people. "We entertained a lot," she says. "They got used to [having guests around]."

In addition to meeting all kinds of people, missionaries are often required to speak in Sacrament meeting and many other places, so be sure to help your children take advantage of all speaking opportunities, whether at church or school. The more comfortable they are in front of a crowd, the better off they'll be in the mission field.

Finally, teach your children to respect different cultures early on. Culture shock is common in foreign missions, but being educated will help lessen the blow. Invite a returned missionary to teach your family about the people and traditions in the country in which he or she served. Let your children sample foods from around the world. This can be great preparation for a missionary who is called to serve abroad.

Above all else, parents must help their children to spiritually prepare for a full-time mission. Street smarts and social skills can take a missionary only so far in fulfilling the purpose of his or her service, but teaching with the Spirit can bridge almost any gap.

As Jeffrey N. Clayton, former president of the Missouri Independence Mission, stated in last year's BYU Women's Conference, "It's impossible to be an effective missionary if you can't bear strong witness of the Book of Mormon and of Joseph Smith."

Let your children see you bear your testimony, at church and at home, and encourage them to share their own. Help them develop a habit of meaningful personal prayer and scripture study by having family prayer and family scripture study. Many missionaries lament not knowing the scriptures better before leaving, so it is important to remember that knowing the basics before entering the field will make their time in the MTC, and after, much more powerful. In this respect, use the seminary program to your advantage; review scripture mastery with your children so that they can back their testimony of gospel principles with scriptural support.

Finally, provide opportunities for them to serve others. Service develops Christlike traits and charity necessary for performing missionary service with love.

"Missionary preparation ought to begin very early on, so that the MTC experience is a review and not a revelation," Clayton concluded. "What it takes is a willing heart, obedience, and hard work, but a prepared missionary will have greater success than one who is unprepared."

Mike Lindstrom says, "Missionary couples . . . come to the mission field with vast experience they gain through a lifetime of service and study. Couples who have lived the gospel are uniquely qualified to testify of the principles to others."

Couples who are at or nearing the age of full-time missionary service have likely developed many of the skills necessary to be an effective missionary. However, there are other things couples should keep in mind as they prepare to embark on a full-time mission.

John Livingstone emphasizes the value of exercise and nutrition. "If senior couples can prepare to go into the mission field in good nutritional and physical shape, that can really help. You want to have a surplus of energy, a surplus of time, a surplus resources to help these people that you are going to serve."

Livingstone also suggests that senior couples have their finances and family affairs well in hand before embarking. He says "having [their] house in order" allows missionary couples to focus completely on their work and the people they serve.

In October of 2001, Elder Robert D. Hales said, "Couples are sometimes concerned that in their absence they will miss weddings, births, family reunions, and other family events. We have learned that the impact on families while grandparents are on missions is worth a thousand sermons. Families are greatly strengthened as they pray for their parents and grandparents and read letters sent home which share their testimonies and the contribution they are making in the mission field."